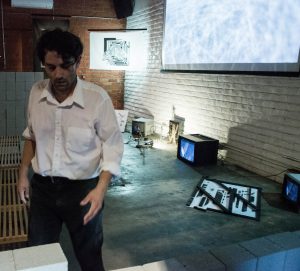 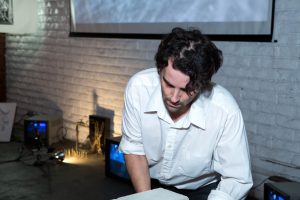 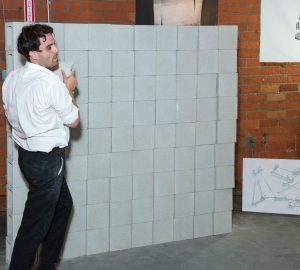 1. I see that you often times do very long performances that involve a lot of endurance. How important of an element is TIME in your pieces? Can you tell us how you negotiate TIME when developing a performance piece?

Time is an important factor in many of the works. With Sweat Equity, the 9am to 5pm window was of course a nod to the conventional American work day. Risk Management was supposed to be a three hour piece, but it ended after an hour because the sheet of glass broke, forcing a conclusion. The possibility of an intended duration being interrupted by unforeseen circumstances excites me.

2. Can you tell us how PAIN plays into your pieces and how you felt it may have been demonstrated in your work? How important are suggestions of pain in your work and what does it mean for you?

Pain is not necessarily an intended focus of my work, but many of the pieces do contain an element of danger. Like a lot of people, I do not want to get hurt, and I am afraid of pain, but the possibility of an action going south adds a layer of suspense that ultimately elevates the piece. Putting myself at risk with these works is a direct contradiction to how I live my daily life outside of making art. Interesting to note though, the American work day being “safe” in relation to the 9-5 of sweat equity? Could tie that with a bow.

3. There were very bold suggestions of LABOR rituals and patterns in your last piece, “Sweat Equity”. Was this piece meant to be a social, psychological or political commentary on Labor laws or any institutions that deal with labor?

The concept of this piece began with the American work day, the amount of time a majority of people spend at work, and the general anxiety of not accomplishing anything during a given work day. I have found that sometimes a concept unintentionally evolves while the performance is taking place, and that certainly happened during Sweat Equity. I have given a lot of thought to what I am willing to put myself through in order to make art, my own personal value as an artist, whether I am even an artist at all… I believe every artist who shows a work is sacrificing themselves in some way, and Sweat Equity was a stripped down reaction to that idea. 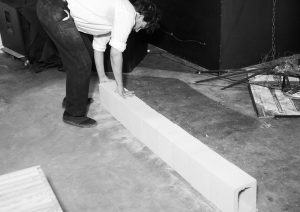 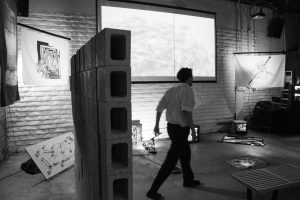 4. There were a number of things that you could have made with 100 cinderblocks in 8 hours. You could have made a tower in the middle of the room, multiple configurations across the room, different piles as if you were mimicking a small city, a bridge, etc. What made you decide to build two walls that get built, taken apart and rebuilt again?

It was important to me that the focus was on the labor rather than what the labor was creating. On paper, the concept was simple, and trying to create anything specific or sculptural may have added a layer of unintentional meaning. Creating new designs or configurations also would take away from the repetitive monotony of the piece. I believe that performing an action identically over and over allows for a type of hypnosis to kick in, both for me and also potentially for a person visiting the gallery.

5. What was going through your mind as you went back and forth building the walls for 8 hours? What did it feel like when you took down decided to dismantle the wall and take the new cinderblock to start all over again? What happened in your mind with that single cinderblock? That was such an important moment.

My mind went blank during the eight hours. It was important for me to let the action speak for itself, and not bring anything else, even my own thoughts or personality, into the equation. I am attracted to the idea of losing my identity when making these pieces and, in doing so, simply representing a human being. I chose to keep the process as seamless as possible, and avoided personally placing more value on the block that completed the wall than on any of the other blocks.

6. So Christopher Reid Martin has also participated in the 8 hour performance of “Sweat Equity” by following you with a surveillance camera which provided a very paranoid and deliberate perspective. How do you feel that this part of the piece added to your action of moving cinderblocks for 8 hours straight?

Yes, I had no idea how much the sense of being surveilled would play into my psyche. It had a huge impact. With Chris watching over me, it felt very much like he was my boss, ensuring that I did not stop, or even rest, for more than a moment or two. He was very pushy about keeping me active, and it really created an unnerving employer/employee dynamic. But I was working in his installation, so I was insistent that he run the day the way he thought best. I started to develop an anger toward Chris during the last hour of the piece. He was the only one who I was interacting with on any level, so he was the only one who would announce that the eighth hour had come to an end, concluding the piece. I desperately wanted that last hour to end, and every time I stopped to catch my breath a little, he forced me to continue by issuing a gavel-like noise from the platform overlooking the gallery. It upset me deeply. Ultimately, I felt a sense of closeness that is very hard to replicate outside of experiences like this. We both sacrificed ourselves, in our own ways, for this piece, and we grew much closer because of it.

This piece was conceived before Chris asked me to participate in his residency, but it became obvious very quickly that our thought processes are aligned. It’s not entirely coincidental that our material fit closely together, especially the relationship of currency and labor. After all, these are things that the two of us think about in general. I intend on performing this piece again, but in different contexts. I won’t perform it as part of another artist’s installation or exhibition. I would like to perform this piece in public, outside of the context of a gallery. I have a few other ideas for this one, and while the labor of the action will be the same, the context and setting will not… Maybe bigger cinder blocks next time. 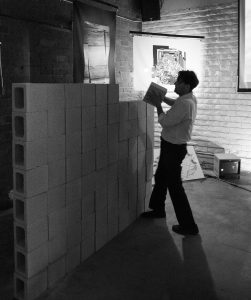 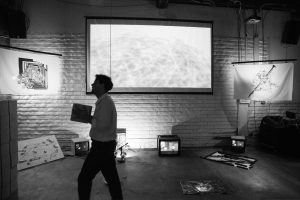 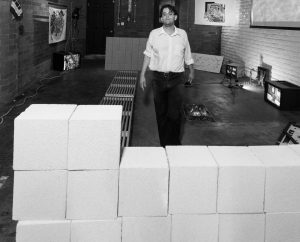 Your ticket for the: Interview with Lev Abramov by Suzy Poling