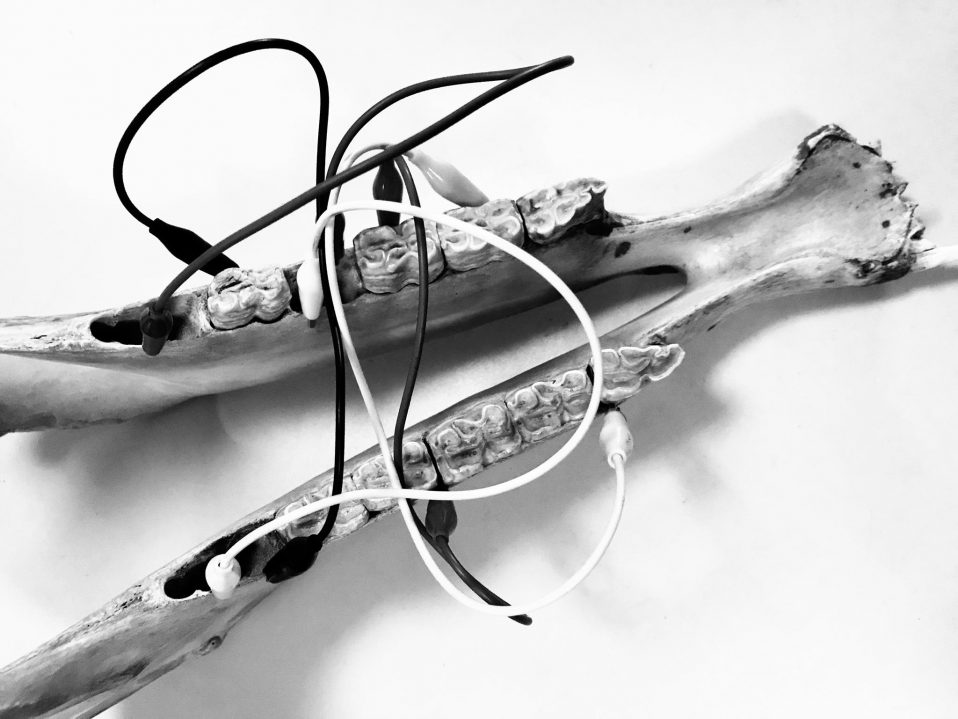 MUMBLE -The action to speak between teeth or to pronounce the words badly to say something dimly and quietly, making it difficult for others to hear.

Plexus is a series of sound actions based on different body movements which try to generate a symbolic dialogue between physical concepts throughout sound improvisation such as: error, randomness and the stochastic in order to describe some kind of body phenomena.

These natural actions comprising the series are determined by randomly choosing an alphabet letter, and then limiting and defining every composition by an infinitive verb beginning with the letter previously selected. The aesthetic elements, the technique and the technological tools used to represent the sounds are confined by the physical conditions of the previously selected verb, as well as by the physical limitations and logistical constraints of the venue where the composition is performed. This iteration is in collaboration with Carmina Escobar

Juanjosé Rivas* – www.juanjoserivas.info
Visual/sound artist specializing in electronic media, Juanjosé Rivas employs myriad techniques to give voice to the translation, error, obstruction, and interference inside artistic languages. Attempts to define the impossible, reveal the hidden, articulate the unspeakable, and evidence the truth as an instituted lie are some of the conceptual approaches used in his work.

Juanjosé Rivas made a sound residence in Centre for Contemporary Creation Matadero in Madrid, Spain (2013); he was Fellow Program Development Cultural Projects and Joint Ventures 2013; beneficiary of the Board of Contemporary Art PAC 2012; and has twice received the grant from the Young Artists Program specializing in Multimedia, FONCA-CONACULTA 2005 and 2011. He was a member of the Council of Planning and Evaluation for the Festival of Electronic Arts and Video Transitio_MX 2010-2014.

Juanjosé currently teaches at University Centro for Film, Design, and Television and is Artistic Director of VOLTA, a series of international concerts of sound art and experimental music in Mexico City.

Carmina Escobar
is a performer, improviser, sound and intermedia artist from Mexico City. Her work focuses primarily on sound, the voice, the body, and their interrelations to physical, social, memory and present spaces. She has extensively explored the capacities of her voice developing a wide range of vocal techniques that she applies not only to her performance and creative practice but also to investigate radical ideas and concepts regarding the voice. In her artwork the Voice is the phenomenon and conceptual trigger that links all the materials, analogue or digital, in order to create an experience that sets in motion the audience perception. Carmina has presented her own work in diverse festivals, biennials, experimental venues, formal concert halls and living rooms of the Mexican Republic, the USA, and Europe.

Micaela Tobin – www.micaelatobin.com
Soprano, sound artist, and teacher Micaela Tobin specializes in contemporary voice and experimental sound practice, performing her own hybrid of noise music and opera under the moniker, “White Boy Scream.” Currently, she is interested in dissecting the construct of her classical training through the genres of noise and drone. The recent premiere of her feminist, electroacoustic noise-opera, Unseal Unseam, at Highways Performance space in October 2017 was described as “paralyzingly beautiful (New Classic LA).” An active collaborator, Micaela has premiered new work at the 2016 NOW Fest at REDCAT, OutSider Fest in Austin, and internationally at the XIII Festival Internacional Musica Nueva in Monterrey, Mexico, the New Music Encounters Plus International Music Festival in Brno, Czech Republic, the 2016 Edinburgh Festival Fringe, and the 2016 Vancouver New Music Festival. She is currently on faculty in the VoiceArts department at the California Institute for the Arts.

Your ticket for the: wulf@coaxial: Mumble