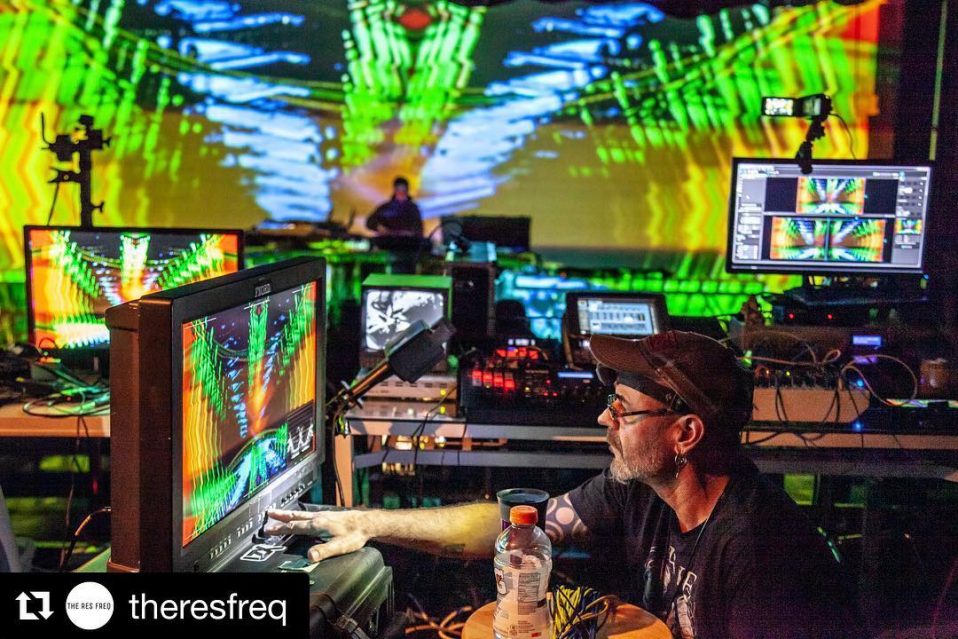 Kit Young is an artist who produces video embedded sculpture, video art, and performance art. Recently he has been building video art systems that are flexible enough to be played in an improvisational way. He performs collaboratively with other sound and visual artists at venues that host expanded cinema events. He also conducts live experimental sessions in his studio, the results of which become video shorts. Though his work utilizes new media technique, his practice is grounded in the experimental cinema thematic traditions of perception, awareness, social justice, and humor. He has exhibited and performed nationally and internationally. Recent screenings or performances have taken place at the Montreal Underground Film Festival, (Canada); Transient Visions Festival of the Moving Image, (Johnson City N.Y.); The Berkeley Video and Film Festival, (Berkeley, CA.); the Experimental Film Festival, (Middlesbrough, England); and Crossroads Film Festival, (San Francisco, CA.). https://vimeo.com/user9265125 instagram@videoactive_avocado

Julian Taquechel, also known as TAQO, is an American-Brazilian sound artist from Berkeley, California. Specializing in modular synthesizers, his work focuses on irregular and expressive shifts in both time and timbre creating compositional structures that range from ambient drones to harsh noise. As an outspoken vegan and animal-rights activist, Taquechel aims to create musical narratives embodying the commercial exploitation and mistreatment of animals. https:// taqo.bandcamp.com/

Lachlan Fletcher is a composer and modular synthesist based in San Francisco by way of Vancouver and Montreal. He makes music about the phenomenology of sound in and through space, composing for and improvising with acoustic and structural resonances. It often sounds like a collaboration between Eliane Radigue and Steve Albini. https://lachlanfletcher.bandcamp.com https://instagram.com/lachlanfletcher https://twitter.com/lachlanfletcher

Bill Wiatroski is a Media Artist based in the Alameda, California. Bill uses modular video synthesis and real-time camera feeds and feedback as source, processed through an array of obsolete broadcast mixers and bespoke processors, to create subtly colored abstract interpretations of the electrical and optical signals generated by the instruments interacting with environment. Bill is currently building a collection of modern and historic video hardware with the intention of creating an open studio/residency space in the Bay Area for media artists. Bill’s work has been featured in solo gallery and group shows at Phoneix Gallery, SubZero Festival, Sand City’s West End Festivals, Bath University’s Seeing Sound, Gray Area’s Unseen Series. He regularly collaborates in performance with Bay Area and has visually supported touring artists including Mike Patton, Q Bert and more. He is Resident Visualist at the Bay Area modular open mic series ResonantFrequencies (now in its 18th edition) and holds irregular residency at RobotSpeak’s Church of the SuperSerge. https://vimeo.com/user22808975 instagram@dirty_bill

Cheryl Cambras creates experimental videos to explore the nature of visual perception. She is particularly interested in the limitations of perception, learned through cultural values and expectations. Her recent “selfie” videos are reflections upon beauty and self-imagining, and the ways we communicate our visible selves to others in virtual settings. When projecting her videos, Cheryl works improvisationally, by live-processing the images using video synthesizers to break the pictures down even further. Cheryl received her MFA in Film, Video, and New Media from the School of the Art Institute of Chicago and has exhibited her work internationally. Recent performances of her work have been at the Echo Park Film Center, the Creative Technology Center in Los Angeles, CA, and Philip Martin Gallery in Culver City, CA. https://vimeo.com/user45110190

Tomory Dodge is a Los Angeles based visual artist and musician. He has been involved in several music projects, most notably, his ongoing collaboration with experimental video artist and film maker Cheryl Cambras. He is also one third of the Seattle based electronic music project New Weather. His recent music has been experimental in nature and often makes use of generative and semi generative techniques of modular synthesis. He has self released two albums as well as two albums with New Weather. He has performed on the Synth Parlor on KCHUNG Radio, at the Echo Park Film Center, Philip Martin Gallery, Creative Tech, as well as Modular on the Spot LA.

Your ticket for the: West Toast – One Night of Experimental Sights, Sounds & Toast