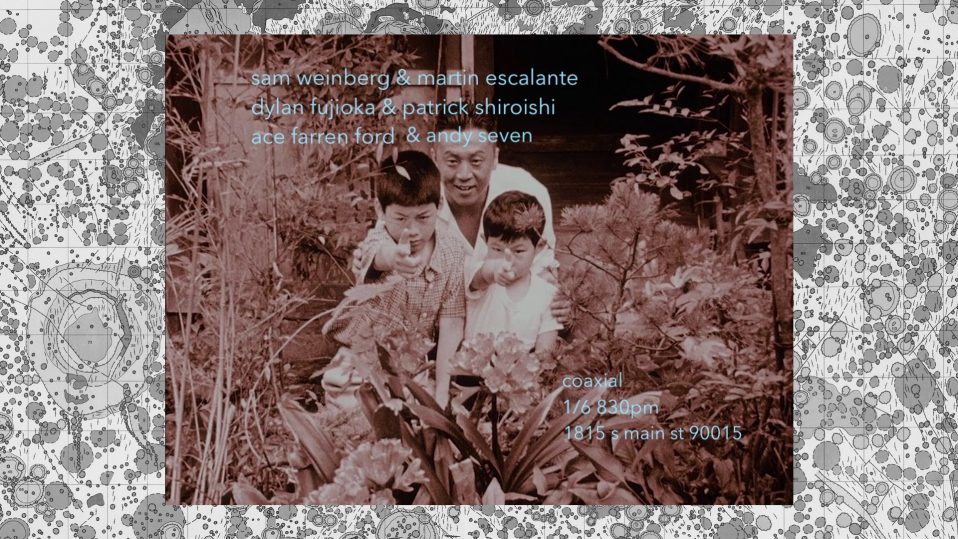 Sam Weinberg is a saxophonist, composer, and improviser from Brooklyn, NY. He currently leads the band BLOOR (with Andrew Smiley, Jason Nazary and Henry Fraser), whose 2019 debut, Drolleries (Astral Spirits), was widely praised. He likewise participates in a number of improvised collaborations which have included the likes of Henry Fraser, Ben Bennett, Sandy Ewen, Weasel Walter, Brandon Seabrook, Mike Pride, Chris Welcome, Charmaine Lee, Chris Pitsiokos, John McCowen, Ben Gerstein, Jaimie Branch, Mark Morgan (sightings), and many others. He also has worked extensively with sound collage and musique concrete in which he is principally concerned with perception, texture, repetition, and disintegration. His music has been released by Astral Spirits, Buh Records (Peru), Anticausal Systems, Amalgam, and his own imprint Renfusa. Weinberg has performed throughout the United States, Canada, and Europe.
https://www.samweinberg.net/

In the Womb is a project between long time collaborators Dylan Fujioka & Patrick Shiroishi. Moving between intensely structured and free improvised sections, the two explore the endless possibilities of a sax-drum duo. Originally started in 2011, the two are planning to release their debut record next year on Nefarious Industries.
https://dylanfujioka.bandcamp.com/
https://www.patrickshiroishi.com/

Martín Escalante (California, 1983, resides in Mexico) photographer, filmmaker and self taught musician grew up in Guanajuato, Mexico and began working on the short films of his brother Amat in 1998. He was casting director and first assistant camera man on SANGRE (FIPRESCI prize, Cannes, 2005). He worked as co-writer, casting and behind the scenes director on Los Bastardos (Cannes, 2008). He then worked with his brother as casting and behind the scenes director for the feature film Heli (best director, Cannes, 2013). In 2012 he started his label Sploosh Records on which he publishes his music as soloist and collaborator on saxophone as well as the music of a few others on vinyl, CD and cassette. In 2014 he began touring frequently with his duo Caracol Carnívoro culminating with an 11 concert tour in Mexico along side the Norwegian rock band Moe, he has since played extensively in Peru, USA, Mexico and Europe. In 2014 he published the second issue of Meche Magazine which contains his still photography work (for adults only). In 2016 he worked as casting director and behind the scenes director on The Untamed (Venice, Silver Lion for best director). On this last film he also supervised the soundtrack, composed by Guro Moe and Lasse Marhaug which was released on his own Sploosh Records on LP in 2018. In 2018 and 2019 he has been more in demand and more often than not has been performing on other projects and record labels with artists including Matt Mottel (Talibam!), Sissy Spacek (John Wiese’s group) , Weasel Walter and Noah Souza among others.
https://splooshrecords.bandcamp.com

Your ticket for the: Weinberg & Escalante, Fujioka & Shiroishi, Ford & Seven