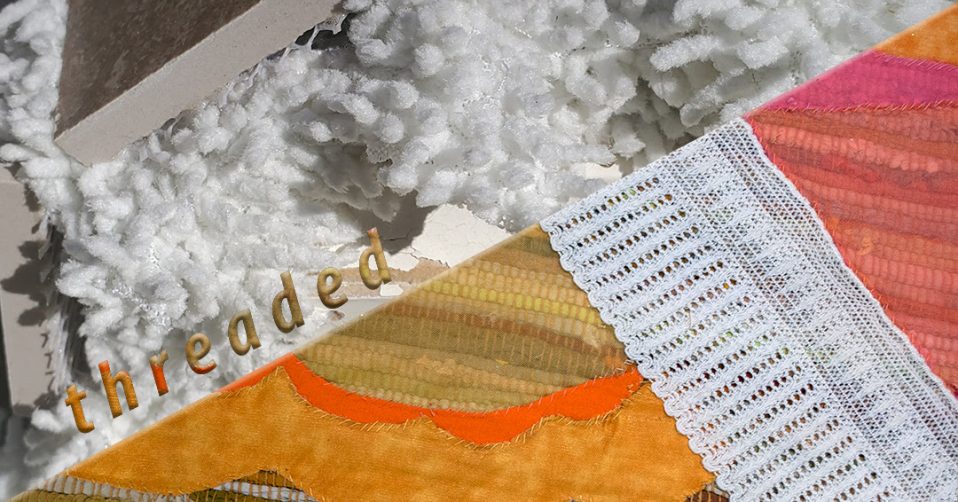 Threaded
Saturday, October 23rd 7PM PST
Live-streamed on Coaxial Arts website: https://coaxialarts.org/liveThreaded is a performance show containing works by Brenda Gonzalez and Rachel Deane. Gonzalez will give an artist talk about recent work, and Deane will facilitate a performance that includes sculptural and written contributions by E. Winslow Funaki, Neidy Lizbet, Brooklynn Johnson, and Mercy Hawkins. Using textiles and found objects, these works will explore the expanded idea of “home”; presenting themes including memory, identity-building, and communal storytelling.Rachel Deane is a California based artist, who was born and raised in Atlanta, Georgia. She holds a BFA in Painting and an MA in Art + Design Education from the Rhode Island School of Design, and an MFA in Art Studio from the University of California, Davis. She has been an artist in residence at The Chautauqua School of Art, The Vermont Studio Center, and The Wassaic Project. Her work has been collected by the Jan Shrem and Maria Manetti Shrem Museum of Art.

Brenda Gonzalez was born and raised in East Los Angeles, California. She earned her Bachelor of Arts degree at Dartmouth College in 2015, majoring in both Studio Art and Japanese Language and Literature. She continued her studies in art through a post-baccalaureate program at Brandeis University from 2017 to 2018. In 2020, she received her Masters of Fine Arts at the University of California, Davis.

E. Winslow Funaki is a maker and educator working in sculpture, furniture design, video, performance, and baked goods. As a reflection of her own mixed identity, she creates in-between objects that resist categorization. She holds a BFA in Painting from Rhode Island School of Design in 2015, attended Skowhegan School of Painting and Sculpture in 2016, and completed her MFA in Furniture Design at RISD in 2020. Her work has been exhibited in venues including Special Special in New York, the RISD Museum and Brown University in Providence, RI, and the John Michael Kohler Arts Center in Sheboygan, WI.

Brooklynn Johnson is an artist and educator who works in multi media painting, sculpture, and performance. Her work explores games and stages as playgrounds for testing visual and philosophical ideas. She received her MFA from UC Davis and has since attended Casa Lu’s Art Residency in Mexico City, and was an Ali Yousefi Projects Fellow in Sacramento, CA. She currently lives, teaches, and works in Salt Lake City, Utah.

Mercy Hawkins received her MFA in Art Studio at University of California, Davis in 2021. She received her BA in Art Studio from California State University Sacramento in 2018 with a minor in History. Presently she works at the Before Columbus Foundation in Oakland, CA, a non-profit promoting multicultural literature for fifty years. She is currently a graduate fellow in residence at the Headlands Center for the Arts, Sausalito and her work has been featured in New American Paintings, MFA Annual.

Your ticket for the: Threaded