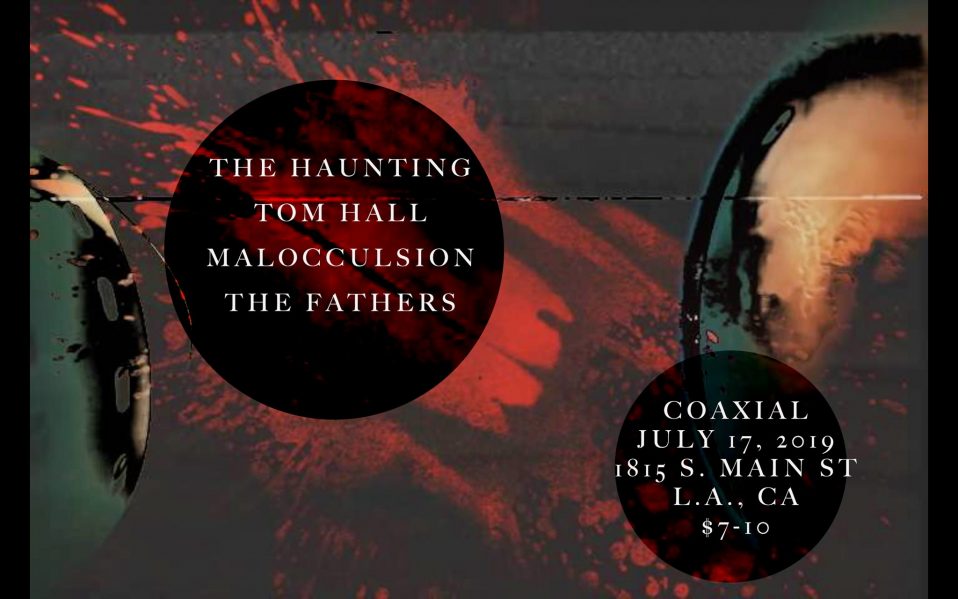 Before forming the acclaimed dark post-punk project Clay Rendering, Mike and Tara Connelly unleashed a series of raw and unnerving slabs of noise in the mid to late 00’s as The Haunting, their foreboding minimalism finding its way onto vital labels like Chondritic Sound, Hospital Productions, Heavy Tapes, and Mike’s own imprint Gods Of Tundra. Recently resurrected and just as fiercely coarse as ever.

Tom Hall is an Australian audio/visual artist, residing in Los Angeles. His practice involves explorations into place, space and time. Inspired by peripheral spaces found in the everyday, he focuses on using multiple approaches to engage and recontextualize, using sound and imagery as a means to translate and create hybrid environments and temporal translations.

Malocculsion is a sound, visual, and performance artist currently based in Oakland,CA, exploring relationships of sound, the body and the exterior space in which they exist, psychosis, mortality, the prison system and the omnipresent entropic trap door of life. Also performs in multimedia performance projects Coral Remains (fka Styrofoam Sanchez) and curates the Ratskin Records imprint (Since 2005) and is a curator In residence at Pro Arts in Oakland, CA.

The Fathers is the duo of the Bay Area’s Derek Gedalecia, a.k.a. Headboggle, and Los Angeles’ Nathan Bowers of Tusco Terror and his solo guise Coagulator.

Derek Gedalecia, a.k.a. Headboggle, has been performing electronic keyboard-based soundscapes for several years in the Bay Area in over a hundred local performances at venues ranging from GTK to YBCA. Incorporating lowbrow with highbrow art, music, and comedy, Head Boggle’s intent is to fuse together a new ecstatic improvisational performance style with a carefully crafted musical underbed.

Nathan Bowers has been a mainstay of experimental circles in Ohio and the Bay Area, and he has just recently taken up residence in Los Angeles. Bowers was a founding member of Ohio noise behemoth Tusco Terror and one of the founders of the Tusco/Embassy label, responsible for releasing the work of Emeralds, Leslie Keffer, Nautical Almanac, and Bee Mask among others. He also performs solo as Coagulator.

Your ticket for the: The Haunting, Tom Hall, Malocculsion (Oakland), The Fathers (Oakland/LA)