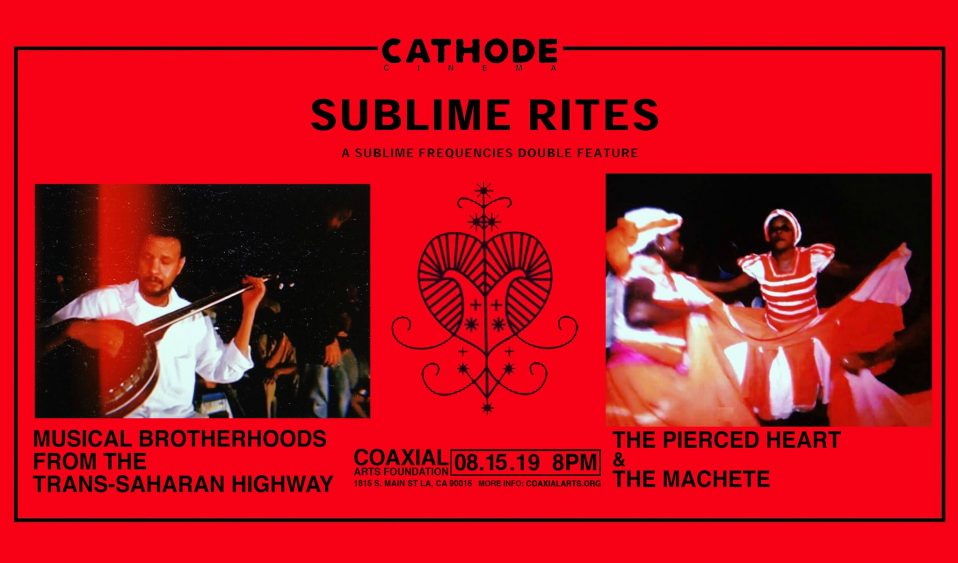 The Pierced Heart & The Machete
Directed By Olivia Owens Wyatt

“The Pierced Heart & The Machete is a vivid, unflinching exploration of two annual Vodou pilgrimages in Haiti. The first is for Èzili Danto, goddess of love, art and passion; worshipers from all over the world descend on the southwestern town of Ville-Bonheur to bathe in the sacred waterfall where Dantò resides. The second pilgrimage is for Dantòs’ husband Ogoun, god of war, iron and healing. It takes place at the end of July in the northern town of Plaine du Nord, where practitioners bathe in a mud pool and make flamboyant sacrifices.
This beautifully shot film offers disorienting yet illuminating glimpses of the contradictory and complementary aspects of these two lwa, the electrifying rites that honor them, and the intense music that accompanies these ecstatic and bloody ceremonies. As in her previous film for Sublime Frequencies, Staring Into the Sun, Olivia Wyatt’s vision is always sharp, unerring and unobtrusive”

Musical Brotherhoods From The Trans-Saharan Highway
Directed By Hisham Mayet

“Filmed in 2005 predominately at the Jemaa Al Fna in Marrakesh Morocco, ‘Musical Brotherhoods of the Trans-Saharan Highway’ captures an assortment of spectacular musical dramas presented live and unfiltered on the home turf of the world’s most dynamic string and drum specialists performing and manifesting the ecstatic truth. Ancient mystical brotherhoods have been flourishing for centuries in and around the cities of Marrakesh and Essaouira in Morocco where the trade caravans have gathered from their long journeys across the Trans-Saharan Highway. This is some of the last great street music on Earth. A must see for string aficionados looking for inspiration as electric ouds, banjos, mandolins and the Gnawa sentir peel flesh from bone right before your eyes!”

Films are an hour each, there will be a short intermission between them with special drinks and a Sublime Frequencies DJ set before and after films. Come see some of the best films Sublime Frequencies has produced on the big screen and in surround sound! You don’t want to miss this!

Your ticket for the: Sublime Rites: A Sublime Frequencies Double Feature