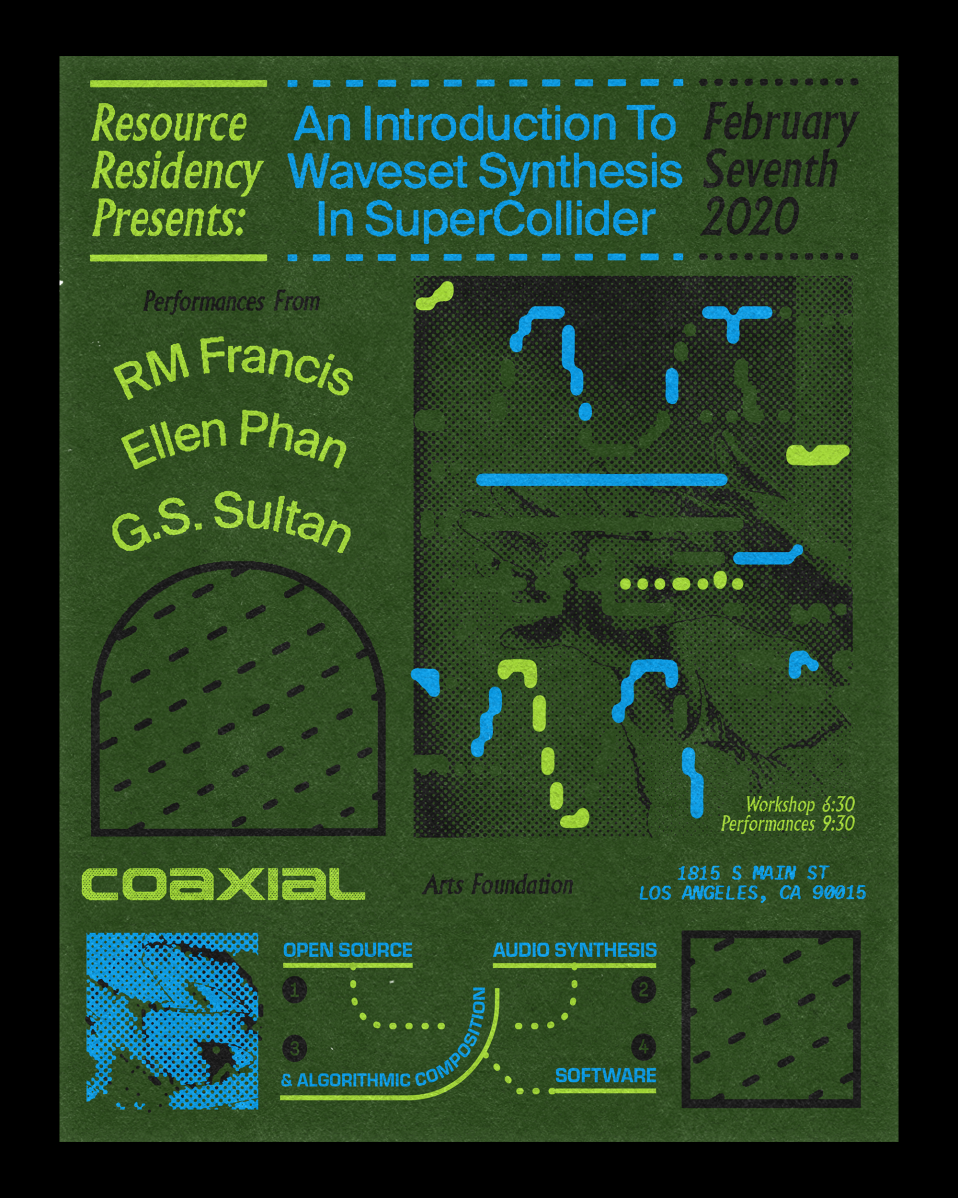 Introduction to Waveset Synthesis in SuperCollider
Led by RM Francis

Waveset synthesis is a DSP paradigm first developed by Trevor Wishart that involves the selective transformation of individual wave cycles in a sound file. SuperCollider’s Pattern objects are an elegant algorithmic toolkit for exploring the potential of this approach to sound-making. Some prior SuperCollider experience will be helpful, but the aim is to make the code understandable and usable for newcomers as well. We’ll start with a quick conceptual and historical overview of waveset synthesis and then move into practical examples, using code adapted from Alberto de Campo’s chapter on microsound in The SuperCollider Book as a starting point before progressing into more involved techniques.

Participants should bring a laptop with SuperCollider installed, mono soundfiles to work with (a few seconds to a minute in length), and headphones/earbuds. If anyone has trouble getting SC running before the workshop, there are helpful support groups at open_in_newscsynth.org

Performances:
Ellen Phan
ellenphan.tumblr.com
Ellen Phan is an artist working primarily in the field of computer music. Therapy-specific methodologies are employed as source material, modulated autonomously by para-sympathetic activity through a variety of processing and synthesis, with an aim to gather insight into cognitive and emotional states on a subconscious level. Hers is a distinctly hallucinatory psychoacoustic sound world aimed directly, with intent and focus, at the subconscious mind. She is based in Los Angeles.

RM Francis
RM Francis is an artist working with computer-generated sound via performance, recording, and installation. His work has been presented throughout North America at numerous festivals, including Debacle (Seattle), 2 Day (Portland), Diffusion (Baltimore), and Human Festival (Philadelphia). His Hyperplastic Other project is a series of works utilizing chocolate, video, performance, and sound to dramatize alternative models of subjectivity. Francis was also a member of Mesh Collaborative, a computer music ensemble employing network architecture to explore novel modes of distributed authorship and human-computer collaboration. He lives in Seattle, where he is also active as a concert organizer