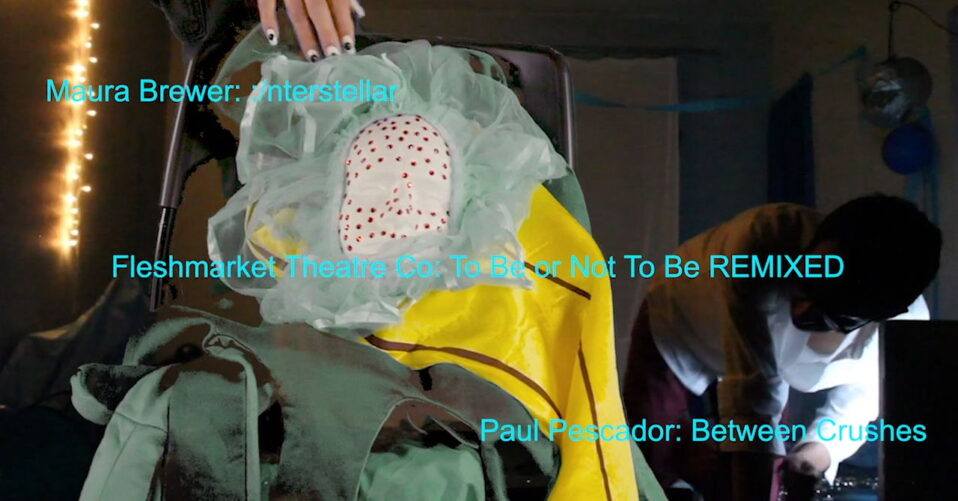 Maura Brewer – :/nterstellar / Fleshmarket Theatre Co – “To Be or Not To Be REMIXED” / Paul Pescador – Between Crushes

Coaxial Arts presents an evening of performance works with artists Maura Brewer, Flesh Market Theater Co and Paul Pescador. Each set of artists uses humor, absurdity and play to explore one’s relationship to the larger world around them, whether it be the reconsideration of father/daughter dynamics in mainstream cinema, classic theater or their own past heartbreaks.

In order of appearance:

Maura Brewer explores the construction of female subjects in mass culture through her work in video, performance, and experimental fashion design. Her video essays combine footage from Hollywood films, television, and Internet subcultures to question the ways that popular culture mimes the language of feminism in the service of patriarchal capitalism

Brewer will present her video :/nterstellar, 2015, an essay video that appropriates footage from the 2014 film Interstellar, starring Jessica Chastain. :/nterstellar retells the original film from the point of view of Chastain’s character, a girl whose father leaves at the beginning of the story. The relation between father and daughter is explored by analyzing a series of metaphors from the original text.

Fleshmarket Theatre Co @fleshmarketco is a new, LA based absurdist theatre company founded by Colin Yeo @colinyeoexists and Nic Prior @nic_prior. They explore the sentient experience of Earth dwelling creatures through humor, chaos, whimsy, and dread.

“To Be or Not To Be REMIXED” is an indulgent take on the classic soliloquy. Theatre is dead so let’s have fun.

Paul Pescador is a contemporary trans-nonbinary artist who works in film, photography, and performance. For Coaxial Arts, Pescador will present Between Crushes, in which return to a series of five performances each titled after a set of colors, each performed in 2013/204. Considering these performances as a “shot by shot recreation” of their own past projects this time in front of a blue screen.The project allows for an ever changing set of ideas to expand and grow. The combination of installation, performance and video will form a complex set of moving images that explore personal narrative, physical intimacy and social disconnect.

Your ticket for the: Paul Pescador “Between Crushes” featuring work by Maura Brewer & Fleshmarket Theatre Co