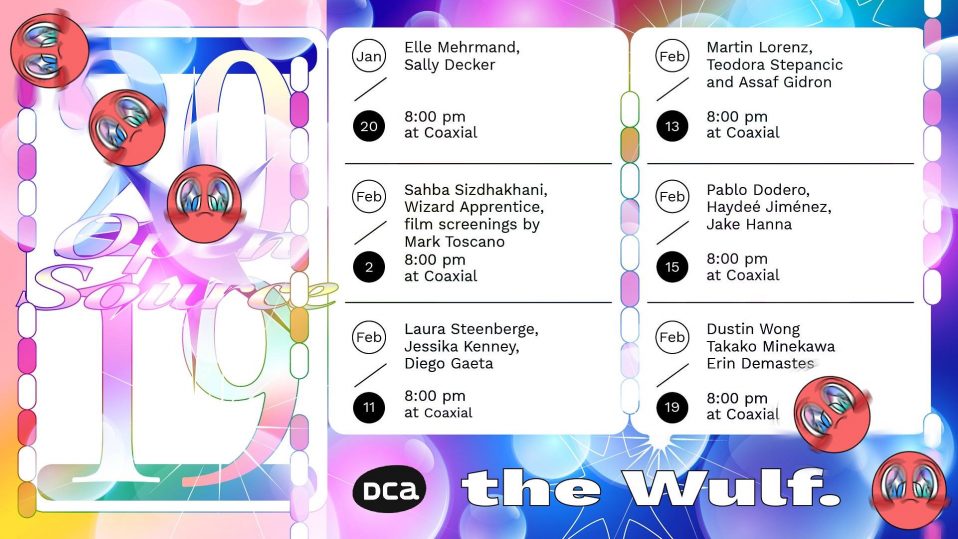 Iranian-American percussionist and composer serves as a unique crossroad of East meets West. Inspired heavily by 1960’s free-jazz and Persian Traditional Music, he constantly channels the fire-energy and longing for connectivity that these two stormy histories represent.
Sahba completed a Bachelor of Arts at The University of Maryland in Art History and Archeology as well as in Jazz Performance at Berklee College of Music. He has played and recorded with artists on the imprints of Dischord Records, Southern Lord, and Drag City.
His hazy, atmospheric solo performances with 104-string santour and drums have been described as “a dispatch from antiquity.” (https://www.sahbasizdahkhani.com/)

is an independent electronic music producer, motion graphics and live performance artist. As a highly-sensitive introvert, her multimedia projects are strategies for energetically managing an overwhelming world. Her music is a combination of lyrical precision, minimalistic composition, and technically amateurish charm. She creates digitally-based media that takes advantage of accessible, user-friendly technology; allowing her to skip time consuming learning curves and get straight to focusing on inventing personalized yet highly relatable language for deeply subtle and internal experiences. She’s not a gear-head, rather, a digital folk artist who vividly and simplistically expresses her inner world using resourcefulness and honesty. Her video work incorporates green screen graphics, digital puppetry, and minimalistic compositing to produce imagery that’s cerebral, campy, and hypnotic. She combines song and video to create multimedia live performances that explore intimate emotional themes ranging from the challenges/triumphs of being an empath to overstimulation in the Internet Age. (http://www.url-gurl.com/)

is a filmmaker, curator, and film preservationist based in Los Angeles. Since 2003, he has worked at the Academy Film Archive, where he specializes in the curation, conservation, and preservation of artists’ films. He works with the collections of over 100 filmmakers, and has overseen the conservation and preservation of hundreds of films, including work by Stan Brakhage, Barbara Hammer, Chick Strand, Tacita Dean, Penelope Spheeris, the Whitney brothers, Gus Van Sant, Pat O’Neill, Suzan Pitt, and many others. He has curated and presented programs at numerous venues, including MoMA, Arsenal, Eye Filmmuseum, Tate Modern, and festivals in Rotterdam, London, Oberhausen, Zagreb, Bangalore, Seoul, and elsewhere. He is a programmer with Los Angeles Filmforum, and has lectured at various universities on experimental film and archiving, as well as teaching in the Experimental Animation department at CalArts.

////
This event is a part of the wulf.’s third annual Open Source electronic music series. Each event in the series is dedicated to presenting new works by artists working with technologies in unique and innovative ways. Open Source is made possible in part by a generous grant from the DCA Los Angeles.