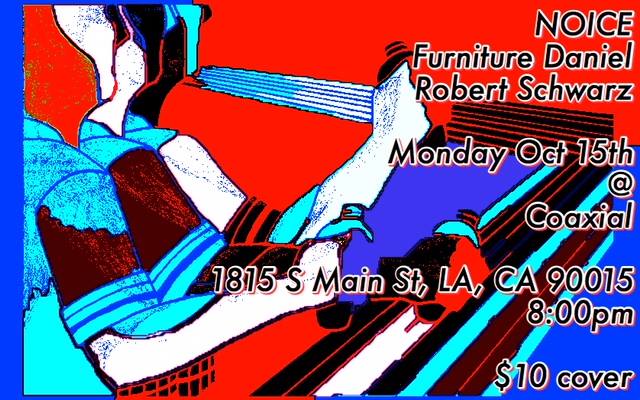 NOICE is a Los Angeles-based ensemble that seamlessly melds art rock, jazz, post minimalism, and electronica into a singular, mesmerizing sound. Led by Alexander Noice, the ensemble is celebrated for their electrifying live performances – acrobatic in its execution and cinematic in scope. They are now embarking on the release of what will be their debut album.
Alexander Noice has written for a wide range of projects and ensembles over the past 10 years. Some of the more recent releases include his solo electronic album”Music Made With Voices”, and “Boiling High Idol”, the sophomore album of his punk/prog trio Falsetto Teeth, both of which have been released on Los Angeles based label Orenda Records. NOICE is his most personal and fully realized project to date, incorporating the diversity of genre, and musical neurosis that makes his music so inimitable.

furniture Daniel is the solo electronic project of David Dominique. Performing on analog synthesizers, voice and loop pedal, Dominique creates colorful patchworks of looped polyphonic vocal harmonies, chants, utterances and evolving timbres. Rich, abstract soundscapes intersperse with winding multi-layered songs, exploring grief, mania, hallucination and catharsis.
Dominique, is a composer, performer and music theorist living in Richmond, by way of LA, Boston and New York, recently appointed Assistant Professor of Music Composition and Theory at the College of William & Mary.
Much of Dominique’s recent music has been written for an extended jazz octet, including the forthcoming Mask (November, 2018, Orenda Records), and the widely-praised album, Ritual, described by Downbeat Magazine as a “rowdy muscular brand of modernism. Picture Charles Mingus taking over the Sun Ra Arkestra.” Both albums mix elements of contemporary experimental music, minimalism, rock and ‘60s big band jazz. In support of Mask, Dominique will tour this November on the east coast including New York, DC, Baltimore, Richmond, Philadelphia and others.

Austrian composer and architect, Robert Schwarz, is an internationally-acclaimed modular synthesist. He has presented compositions and installations throughout Europe, Japan and the United States. His ecological approach, blending diverse field recordings with pulsing abstract soundcapes, has been called “radically non-athropomorphic” by Musiquemachine:
“It’s a non-human perspective he’s trying to conjure up with these studio tricks of scale and intensification. The effect is at once vertiginous and thoroughly engaging. A rare feat…”.
Schwarz’s most recent album, Double Negative, has been called “a mystical dream with vivid detail,” (beachsloth) and was described by Touching Extremes as “a beautiful amalgamation of divergent acoustic universes, deeply human…the entirety of a soundscape appears as a biotic continuity of primordial realities and studio-engendered fantasy.”
His collaborative installations have been presented in Los Angeles, Brussels and Vienna, and reviewed in the New York Times, Los Angeles Times, and LA Weekly and numerous others.

Your ticket for the: NOICE, Furniture Daniel, Robert Schwarz