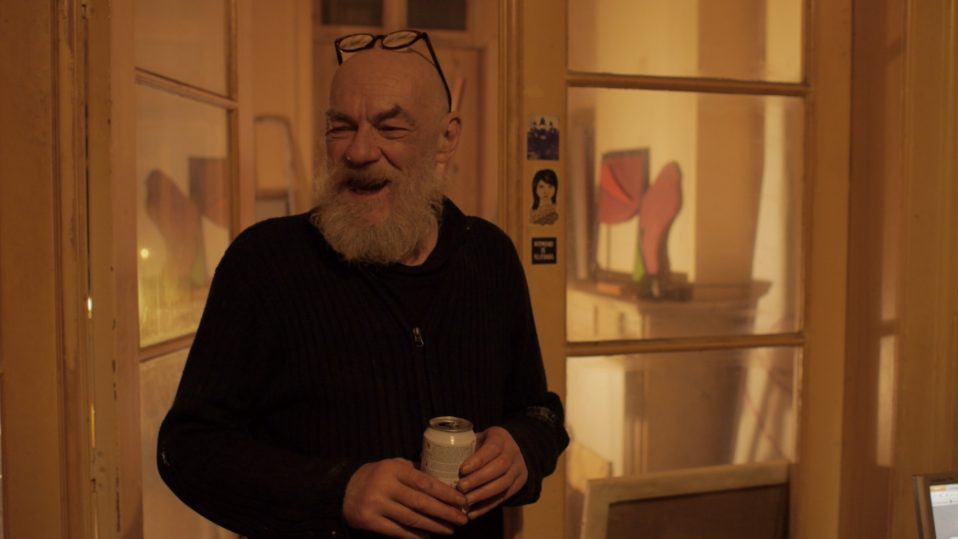 Since the early 1960’s, wildman Ludo Mich has been actively operating on the fringes and the fringes of the fringes of the Antwerp underground art scene. Ludo exists inside the ‘M Dimension’ the world of his own creation in which he has produced a significant body of work across visual art, holographic sculpture, Fluxus film, performance, Avant Garde science and philosophy. The core of his work is always the same: a need to stay pure to his own beliefs, regardless of the consequence. His family and friends know Ludo to be full of love and generosity. Devoted fans know him as a performer who continues to surprise and astonish. But despite 50 plus years of production, Ludo remains practically unknown outside of Belgium. ‘It is his curse to be an outlaw, always,’ remarks his housemate Frank. Ludo has been banned from numerous bars and cafes in his home town due to arousals of raucous happenings and incidents of nudity. In 2014, the Royal Academy of Fine Arts threatened to sue Ludo over a claim that a performance of his instigated the audience to mishandle works from the Academy’s collection. The police have been called to his home/studio on numerous occasions by neighbors complaining that Ludo’s loud barbarous joyful laughter had been going on for just too long. Now in his 70’s, Ludo’s work continues to gain integrity as he ignores conformity, financial gain and stays one step ahead of conventional and conservative art. Through a mix of archival footage, interviews with family and friends and fly on the wall footage, Ludo Is Fantastic immerses us in the world of the ‘Mich Dimension.’

After the screening, there will be a live Q&A with director Willie Stewart via internet feed.
8pm / $8

Your ticket for the: Ludo Is Fantastic screening + Q&A with director Willie Stewart