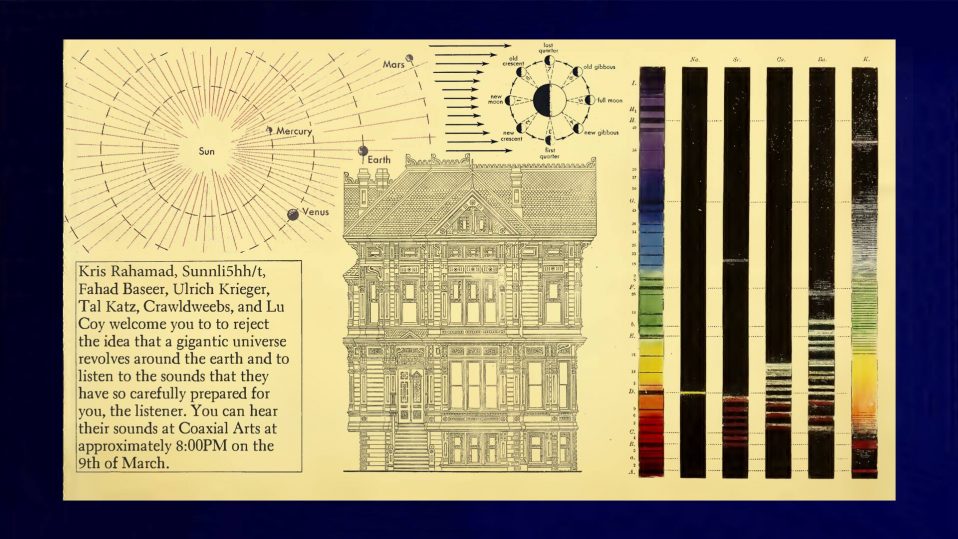 Kris Rahamad, Sunnli5hh/t, Fahad Baseer, Ulrich Krieger, Tal Katz, Crawldweebs, and Lu Coy welcome you to to reject the idea that a gigantic universe revolves around the earth and to listen to the sounds that they have so carefully prepared for you, the listener.

Lu Coy is a mixed media artist and musician based in Los Angeles, California. Originally from Southwest Texas, Lu is of Xicanx /Tejanx and Ukrainian Jewish descent, and creates work in the form of ritual performance art, video, object, experimental music and song. Much of their practice stems from an interest in forging a tangible identity as a multi-ethnic, queer person of color and a desire to give closure to moments of unresolved personal or ancestral trauma- creating reenactments or performances of identity through investigations of mourning, shame, failure, consumption, childhood/adolescence, beauty and gender. As a multi-instrumentalist and vocalist, Lu performs frequently with several prominent groups in LA’s underground queer-latinx music scene (SanCha, Sister Mantos, Sin Color) and has appeared on tracks for artists such as Eyvind Kang, Avey Tare, Blonde Redhead, Tyler Holmes and PJ Sin Suela.

*Sunnli5hh/t* is the alias of LA native, plural trans girlz, Chloe (of Sam Murphey system) under which they create sad, nostalgic, ambient, tape-loop, sound-collage music.
They will be playing some new, never-before-heard, renditions of tracks from their debut album, “Yesterday at 8:11am”.

As a trio, Crawldweebs explores free improvised music through the social and political climate of the world, often times recreating ambient and/or violent soundscapes. We are influenced and inspired by the contributions of artists and styles such as Amiri Baraka, Ulrich Krieger, Vinny Golia, Martín Plot, Karlheinz Stockhausen, Extreme Metal, and Eric Dolphy to name a few.