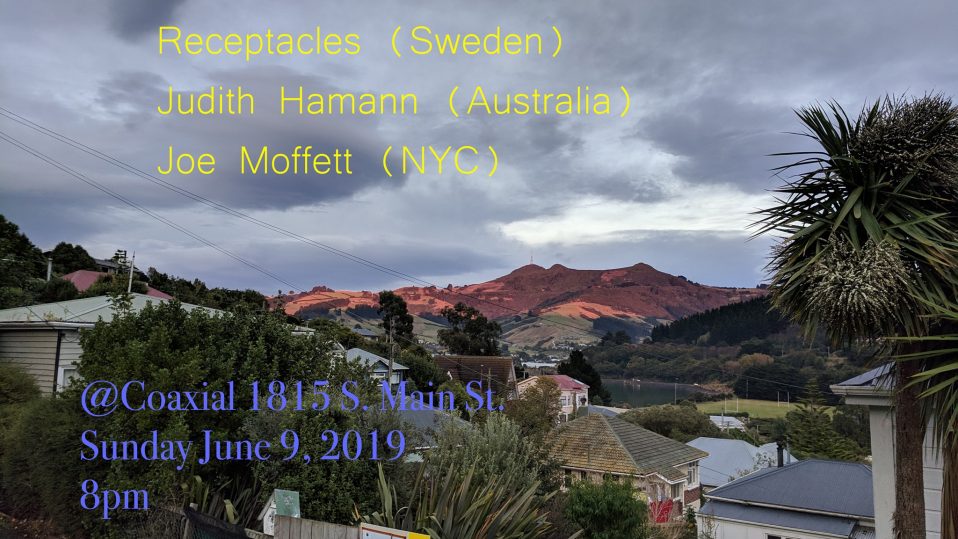 Brought to you by Black Editions Presents: and The Unwrinkled Ear Concert Series

Let’s marry the listlessness of punk-rock with the unpredictability of improvised jazz, as one reviewer of one of these performances stated one time about the way a bird considered his windowsill.
I am super in love with the pleasantness and invigoration that this lineup offers, and on a Sunday to boot: the harmonic complexity and engaging astuteness of Hamann; the physical whodunnit and vital commotion of Moffett; the deadpan fastidious mirage of luxury that is Receptacles.
Three sets of extended technique diversity that ask for a variety of listening styles for maximum pleasure-engagement over the course of an evening.
~~~~

Judith Hamann is a cellist and performer/composer from Birraranga (Melbourne), Australia. She has “long been recognised as one of Australia’s foremost contemporary-music cellists” (RealTime Arts). Judith’s performance practice stretches across various genres encompassing elements of improvised, contemporary classical, experimental, and popular music. Currently her work is focused on ‘Materialities of Realisation’ (a discourse based project with Charles Curtis), an examination of expressions and manifestations of ‘shaking’ in her solo performance practice, and a collection of new works for cello and humming.
~~~~

Joe Moffett approaches his work with a keen interest in unconventional sounds and forms, collective improvisation, and the intersection of action and stillness. He is a co-founder of several projects, including ambient improv trio Earth Tongues and the avant-art song duo Twins of El Dorado, in addition to performing frequently as a solo artist. His material appears on Neither/Nor, Underwolf, Eh?, NotTwo, Tubapede and Prom Night Records.
~~~

Receptacles are a Swedish quartet featuring Jobby Squally (bass), Antonnnis Tooberth (drums) and Dingr Tonny (guitar)
Here is a review of one of their records by Derek Stone: What if Captain Beefheart had cut his teeth listening to The Fall instead of Howlin’ Wolf and Bo Diddley? The result might have sounded like Receptacles’ new album, Freedom From Error, a near-perfect example of the “jazzed up punk shit” that Mark E. Smith once preached about but never quite produced. Receptacles is either a jazz group with rock leanings, or a rock group with jazz leanings, or something else entirely. Just listen to something like “Sounds Like Shit,” with its thudding percussion, jittery, overcaffeinated bassline, and oblique stabs of guitar; it’s too odd and misshapen to be taken for a straight-up punk song, and too stiff to capture the the open-ended fluidity of jazz. A central component of Receptacles’ unpindownable mass of writhing, twitching sounds is the voice of Squally. Like the aforementioned Mark E. Smith, he spits out words with a deadpan, sing-speak delivery that is as acerbic as it is (occasionally) downright funny. On tracks like “Camping,” he simply lists the supplies needed for a successful (you guessed it) camping trip, while “Parkour” is a chance for him to espouse the benefits of the titular activity. Behind all of Williamson’s offbeat musings, the band carries on: Tooglesl is the most distinctive musical voice here, with his jagged slabs of guitar noise that often seem to take Marcrief’s throbbing, motorik-indebted time signatures as mere suggestions. Likewise, Williamson is no slouch on the bass; playing with a stuttering, nervous energy that contrasts nicely with the disaffected inscrutability of his voice, he provides a reliable anchor for Toogell’s more manic moments (the super-charged explosiveness of closing track “Uppin’ the Ante,” for example). While you could get into endless debates trying to figure out just what kind of music this group makes, it would likely be a fruitless endeavour – I doubt the band themselves know. As long as you’re receptive to, uh, Receptacles, you’re sure to have a good time – and you might even learn a thing or two about camping!