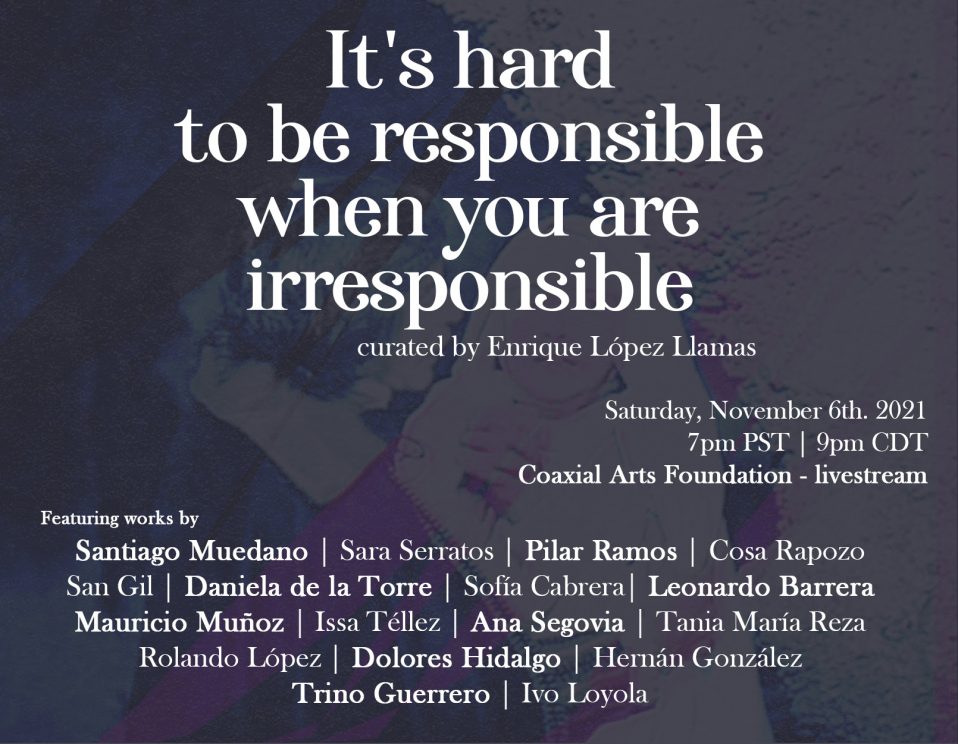 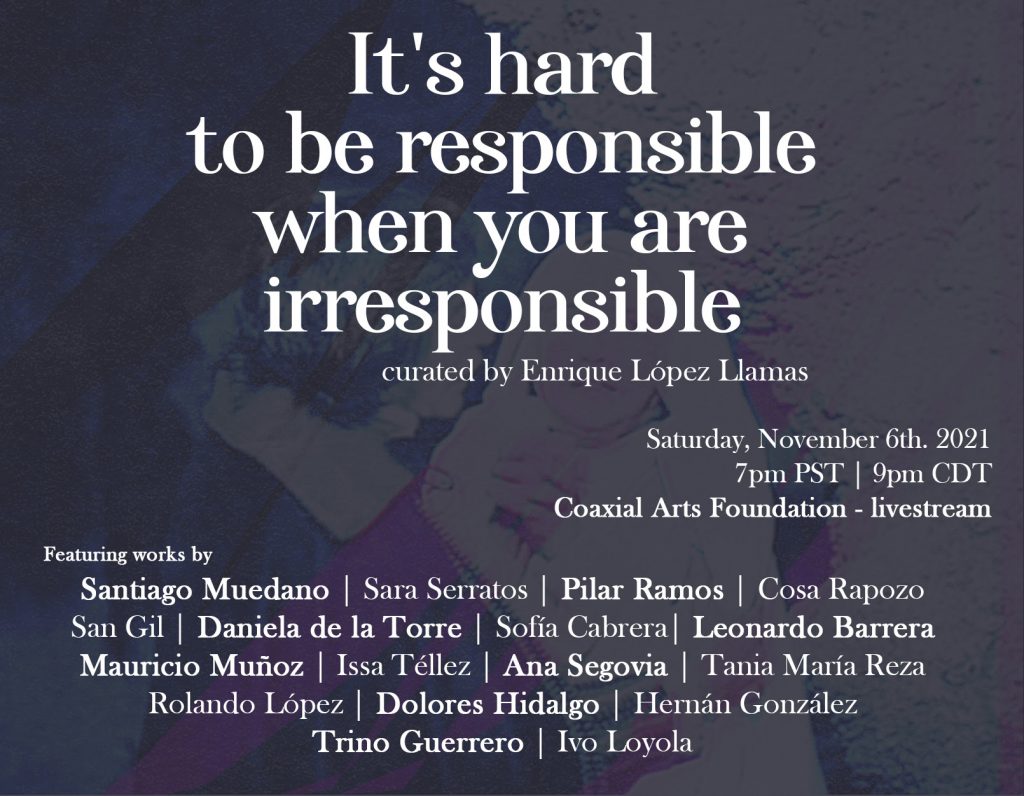 It’s hard to be responsible when you are irresponsible is a video-art exhibition curated by Enrique López Llamas @elopezllamas (Aguascalientes, MX., 1993) for the Coaxial Arts Foundation online program.

The works included in this show operate under a sequenced order of ideas, in which each video aims to be seen (simultaneously) as development, climax and denouement, without a particular direction or under some specific approach. They are dominoes helping each other fall. They are a snowball that turns into an avalanche. In a strict sense, then, this exhibition is not the result of a serious curatorial exercise, but rather a series of connections that I have managed to generate by thinking about and reading the work of artists I admire and with whom I believe I share a path with.

*All text in this video exhibition has been translated to english by using google translate.*

Santiago Muedano
@santiagomuedano
(Mexico City, MX., 1993)
Multidisciplinary artist. He considers that sociocultural phenomena deserve a second review before being discarded into the drawer of the usual. He strongly believes in the absurd as a vehicle for transporting messages and forceful materializer of abstract ideas.

Sara Serratos
@ser_a_ratossara
(Mexico State, MX., 1993) is a Mexican visual artist and photographer. She
lives and works in Salt Lake City, U.S. Her artwork explores language, landscape,
inhabitable places, the environmental and socioeconomic implications of architecture
(mainly in housing), and migration drawing from her personal experience.

Pilar Ramos
@pilarsa41
(Aguascalientes, MX., 1972)
Her work addresses different media such as video, short film and documentary, in addition to performance, intervention and installation, in recent years she has developed pieces related to his relationship with her parents, from long processes where it seems that works never end, where dreams almost dictate the events through the same images.

Cosa Rapozo
@cosarapozo
(Guanajuato, MX., 1987)
Her practice uses speculation. In her work, facets are identified marked by interests that initiate and they come to an end. She considers that appropriation and intervention -both plastic and symbolic- of the found object is part of her methodology to create statements.

San Gil
@sssangil
(Guanajuato, MX., 1980)
Through cultural cannibalism of art history, popular culture and social media, he performs personal capriccios in dialogue with Christian and Catholic representational hegemonies. By working with multiple graphic languages, he appropriates existing profane or sacred images to generate a Sacra Conversazione from the performativity of the graphic image.

Daniela de la Torre
@danidelatower
(Queretaro, MX., 1997)
Her work includes performance, video, photography, digital art, textile and text as image. Her investigations deal with the conditions under which a work of art is seen as such, and how these elements create a dialogue with millennial and gen Z individuals in the context of mass culture and pop culture as primary source for identity and values.

Sofía Cabrera
@pantaloncillosdehombre
(Mexico City, MX., 1993)
Sofía’s plastic, visual and performative work investigates the poetic and conceptual forms of space as a phenomenon in which bodies inhabit, move and affect each other.

Leonardo Barrera
@leo.barrera
(California, US., 1991)
In his photographic and performance work, Leonardo makes use of self-representation to highlight the job insecurity experienced by youth in northern Mexico, as well as the identity crisis that these economic dynamics bring as a consequence.

Issa Téllez
@issatr
(Nuevo Leon, MX., 1995)
I am interested in making art directly from my life. My work is rooted in the experience of inhabiting a body that has been violated, on which the cult of heteronorm and its institutions has been imposed; I use transgression as a means of reconciliation. My work uses cuir, satire, witchcraft and pop culture to generate these spaces for reconciliation and dialogue, where we can laugh together, talk about our struggle, and activate a mechanism that helps us cope with the context of violence and trauma that we live.

Ana Segovia
@ana.sgv
(Mexico City, MX., 1991)
Ana Segovia’s practice investigates the forms of circulation, representation and performativity of identity, mainly within Mexican popular culture. Through the reinterpretation of archives, mostly stills from the Golden Age of Mexican Cinema, Segovia identifies and challenges heteropatriarchal stereotypes present in Western visual media. By way of these circumstances Ana brings together a series of interests that invite us to rethink notions of sexuality and non-binary inclusivity.

Tania María Reza
@taniamariareza
(Mexico City, MX., 1991)
Her audiovisual work is a hybrid exploration between movement, space and technological media. Tania questions the role of movement in the construction of images and sequences through experimentation as a contestation stance before the rigid character of dance.

Rolando López
https://www.facebook.com/guggenheim.aguascalientes
(Aguascalientes, MX., 1978)
Visual artist that from 2014 to date has developed the project “Aguascalientes Guggenheim Museum”, within which he has played several facets as an artist, historian, anthropologist, coordinator, curator, researcher, inventor and museographer.

Hernán González
@elhernann
(Guanajuato, MX., 1992)
He conceives his practice as a research process that takes up certain performativities, located in the field of the sociopolitical, around power and the violence. In the context in which you have grown up, the meaning of success focuses on developing strategies to subjugate and build a model to which one must aspire.

Trino Guerrero
@trinoguerrero
(Aguascalientes, MX., 1991)
He analyzes the forms of representation of violence. This requires reflecting on the representation itself and their capacity for involvement. Generally part of forms of already established significances which are that they are used by means of metaphor, analogy and figuration.

Ivo Loyola
@loyolaivo
(Queretaro, MX., 1997)
It is in his interest to study Mexican culture from a perspective of strangeness, this caused him a constant search for what it means to be Mexican. Due to this, he has a predilection for studying and analyzing, with humor and moving images, the vision and perception of Mexico by foreign and national tourism.

Register for Event: It’s hard to be responsible when you are irresponsible

Your ticket for the: It’s hard to be responsible when you are irresponsible