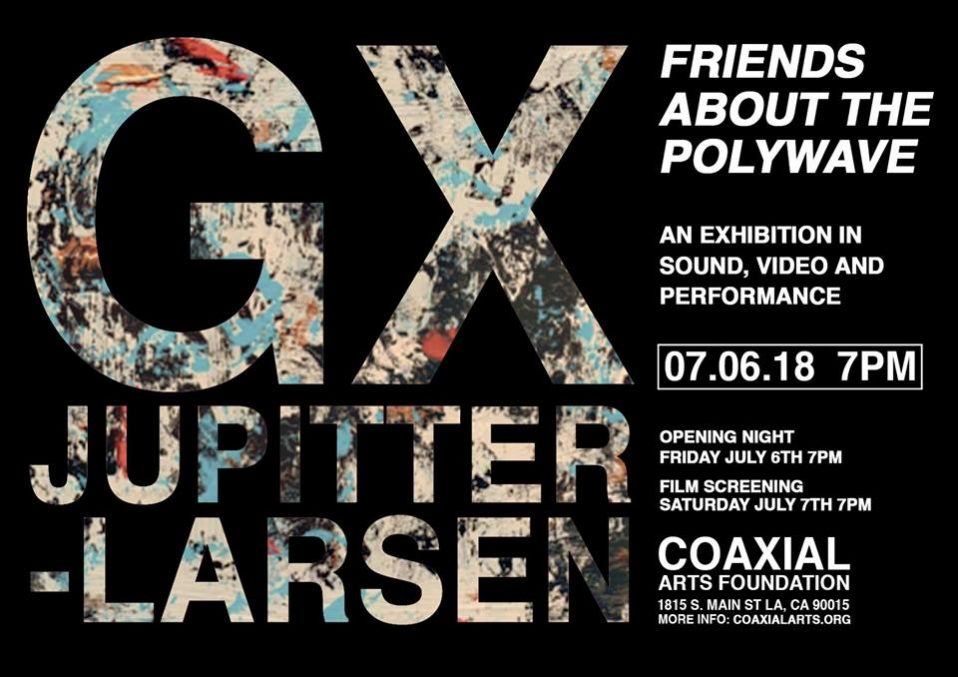 We are so excited and honored to have the legendary and mysterious Los Angeles based Artist GX Jupitter-Larsen as our next ARTIST IN RESIDENCY!

“Friends About The Polywave is a multidimensional answer to a hypothetical question. How does one measure one’s community? By the relationships we grow up with? By the names of those we’ve met along the way? What names act as inches in the meter that is your life?”

“Thinking of life in terms of the urban backdrop essentially becomes a straightedge. A population’s shared experience becomes the calibrated lines of measured distances. In other words, the personal occurrence as a subjective mathematical glimmer. Time-line as a ruler, or if you prefer, the ruler as time-line. Every step I take down the sidewalk is another increment along a readymade ruler. For myself, if I were going to use my old home town Denver as a ruler, its increments would have to start out with how my friend Bob always lit his long red hair on fire. To be followed by my many hours of watching televised weather reports. The final glyph would be how a group of us once regaled a cornered Stan Brakhage with tails of riot-inciting performance art.

I wouldn’t include the times I went bowling with Jello Biafra in my Denver-as-ruler. I enjoyed his company, but it always seemed to me that he liked the idea of bowling more than the actual game”

FACTS ON THE POLYWAVE (1992)
The biker-movie motif is incorporated to ride the issue of social entropy as the debate of thought probabilities. (24 min)

HOLES ON THE NECK (1994)
The vampire-movie motif is incorporated to deal with the issue of entropy as fetish. The narrative is of a group of lesbian vampires who work and play on their garlic farm. Their human lovers desire to become vampires themselves, and so lure these garlic farmers into initiating them into the fold. (14 min.)

OMNIWAVE REFRESHER (2017)
The first of three acts is done as a kind of documentary. The second act is a puppet show, and the third act is a live action reenactment of the puppet show. All three acts are about a scientist who, after a failed experiment of some incomprehensible nature, heads off on a journey to find meaning. (61 min)

GX Jupitter-Larsen (b. 1959) is currently based in Los Angeles. Since 1979, he has worked as a performance artist, sound artist, writer, and filmmaker. He also collects stamps, and is a devout psammologist. Much of his work is a self-created lexicon consisting mainly of personalized units of measurement. A casual observer’s literacy of this vernacular is optional. GX employs all misunderstandings as a calibration. Comparing a reinterpretation to the original intent gives him a deeper awareness of his own thought process. By this means, there is no passive audience, only collaborators. Websites: http://www.jupitter-larsen.comhttp://www.noisyvideo.com

Register for Event: GX Jupitter-Larsen: Friends About The Polywave

Your ticket for the: GX Jupitter-Larsen: Friends About The Polywave