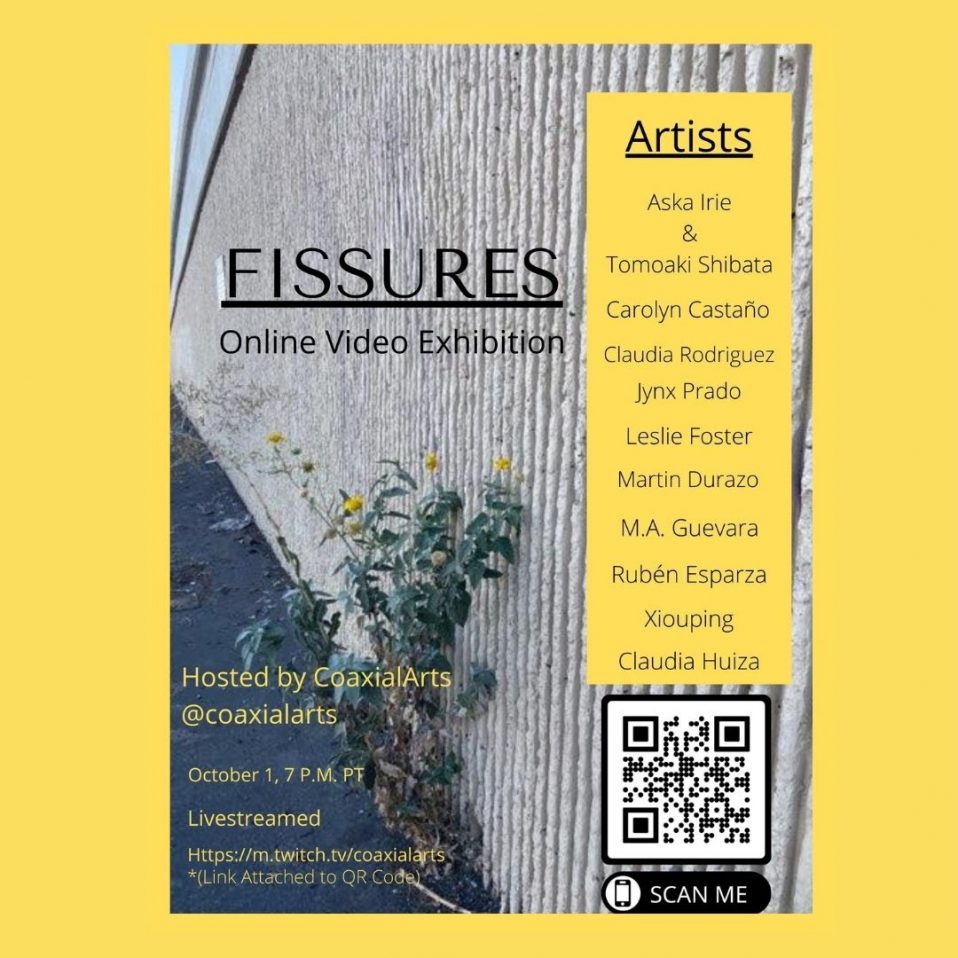 Fissures are the little cracks in the most oppressive materials, such as concrete slab, where groundbreaking, accidental, intentional existence perseveres. Just like the smallest seed can take root under the most oppressive conditions, the most beautiful and meaningful ideas are also expressed under the most difficult and harsh times. Despite all that we must endure day to day as artists of color, as differently abled artists, as non-binary artists, as artists from underrepresented communities, we persist, and we thrive.

Leslie Foster: Through his work with experimental film and installation, Los Angeles-based artist Leslie Foster (he/him) seeks to create fleeting pocket universes and contemplative ecologies that explore Black and queer futurity through the lens of dream logic. His work, which has been exhibited internationally and includes two solo shows, is designed to quietly subvert existing power dynamics while inviting viewers into challenging dialogs through the beautifully strange. He is currently pursuing an MFA in Design Media Arts at UCLA and often fantasizes about running away with a band of seafaring, nomadic artists.

Jynx: Born and currently based in Los Angeles, Prado is an artist who critiques and questions the natural and artificial elements within cultures, nature and human existence and the coexistence of them through an interdisciplinary practice. Through humor, irony, language and symbolism Prado intertwines their experiences and histories as a Queer, Mexican-Salvadoran mixed American in their work in a rasquachismo form. Prado graduated from OTIS College of Art and Design with their Master of Fine Arts + Emphasis in Social Practice degree, and has received their BFA at California State University, Dominguez Hills.

Carolyn Castaño: Carolyn Castaño is a Los Angeles-based artist whose work in painting, drawing, video, and mixed-media installations has been exhibited both nationally and internationally. She was recently the subject of a career retrospective at the Laband Art Gallery at Loyola Marymount University: Carolyn Castaño: A Female Topography, 2001-2017. She holds a BFA from the San Francisco Art Institute and an MFA from the UCLA School of art and Architecture.

Rubén Esparza: Rubén Esparza is an artist, activist, and independent curator. Exploring Queer and Latinx histories, existential trauma, and the reconciliation of his heritage that of the colonizer and the colonized, using analog materiality alongside complex experimental digital-driven works to create sociopolitical commentary or homage to brownness and or queerness.

Xiouping: Xiouping, AKA (TNT) Taiwanese & Texan, is an American new genres photographer, video, installation, sound and performance artist; as well as a writer. Her work examines identity politics through storytelling through a queer/biracial lens of indigenous shamanic Taiwanese, and Cherokee-European ancestry, taking back her agency and narrative, using the relationship between performer and audience, dismantling racism, sexism and the human condition. She holds a BFA from San Francisco Institute, and an MFA + Social Practice from Otis College of Art and Design.

Martin Durazo: A Los Angeles-based artist, Martin Durazo holds an MFA from the University of California, Los Angeles. His work explores the correlation of aesthesized formalist principles and spirituality found in illicit forms of existence. For over 20 years, he has combined installation, video, object-based work, sculpture and painting with a robust curatorial practice. He is represented by Barbara Davis Gallery.

Claudia Rodriguez: Claudia Rodriguez is a community scholar, educator, writer, and performer from Compton. She published her first collection of poetry “Everybody’s Bread” in 2015 with Korima Press. For the past twenty years, she has developed work for/about and with marginalized communities. She received her MFA in creative writing from the California Institute of the Art, (CalArts). She received an Emerging Lesbian Writer Award from the Astraea Foundation in 2001 and is a founding member of Butchlalis de Panochtitlan (BdP), a sketch-driven performance/installation/video ensemble. She has taught at Loyola Marymount University at UCLA.

Aska Irie: Using a variety of materials, including beads, buttons, sequins, acrylic paint and ink, Aska Irie constructs fantastical, abstract and geometric landscapes and portraits that reflect upon urban and popular culture, and her own personal life experiences. Born and raised in Japan, Irie completed her undergraduate coursework at the National School of Painting, Sculpture, and Printmaking (La Esmeralda) in Mexico City. Her work has been shown both nationally and internationally.

Tomoaki Shibata (b. 1981, Tokyo, Japan) works in a variety of media with a strong emphasis in painting. His highly expressive and visceral images reflect upon his life experiences and thoughts and destroy boundaries between high and low art. Although educated at one of Japan’s most prestigious art universities, his work is perhaps influenced more by manga and Japanese traditional and contemporary illustration filtered through his unique, emotive and guttural mode of expression. Shibata received his BFA from Musashino Art University, and currently lives and works in Los Angeles, CA after having received a Japanese national grant from the Agency for Cultural Affairs in 2015 for emerging artists. In 2018, Shibata collaborated with artist Loren Philip to produce the exhibition YEAR ONE curated by Peter Frank at Castelli Art Space.

Claudia Huiza: Claudia Huiza is an LA-Based Salvadoran Pipil Maya artist, curator, educator, writer and activist who for over 25 years has launched many initiatives for positive social change and empowerment of all disenfranchised peoples. In 1991 he received a Getty Foundation award for her work on the Cross-Border San Diego/Tijuana American Festival Project. Her collaborative documentary on Salvadoran Maquiladora workers, Producing Just Garments, won honorable mention at the 2008 Artivist Film Festival, and she is the recipient of the San Diego Citizen’s Coalition May Day Humanities Award. Like many artists from underserved communities, Huiza holds a day job, in which she coordinates cutting edge clinical research studies at Cedars Sinai Medical Center in Los Angeles. She merges her passion for art and activism with her work in the medical field because she believes that art heals and artislife/artesvida.

Your ticket for the: FISSURES