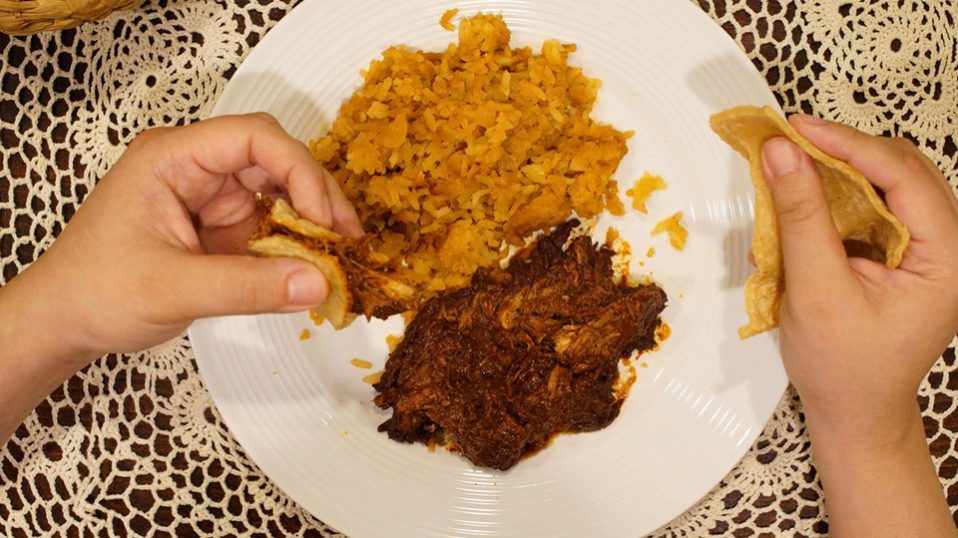 Co-curated with Arshia Fatima Haq, Eva Aguila of Coaxial Arts Foundation presents Comida a Mano, an installation and video screening at Reseda Recreation Center that celebrates cultural diversity by honoring cuisines around the world that prioritize eating with your hands. The use of hands for eating is common in many cultures, sometimes holding a special cultural significance. Celebrating this universal experience and her own Mexican heritage, Aguila’s installation comprises an outdoor earthen oven based on a Mexican comal (griddle). A tortillero artist activates the comal to demonstrate how to make traditional tortillas a mano (by hand) using the comal oven. Aguila is also organizing an evening of experimental and documentary short videos by artists who have a practice or tradition of eating with their hands, including Omolara Abode, Zeina Baltagi, Ciriza, Arshia Fatima Haq, Maria Maea, Anna Luisa Petrisko, Sindhu Thirumalaisamy and Echo Park Film Center youth students

EVA AGUILA – Lead Artist
Eva Aguila is a Los Angeles–based multimedia artist who works in sound, video, theater, and performance art, drawing inspiration from structuralist film practices. She co-founded and is the artistic director of Coaxial Arts Foundation, an artist-run nonprofit space in downtown LA dedicated to experimental sound, video, and performance art. Aguila co-created Coaxial Arts Foundation as a way to expand the community of multimedia artists in Los Angeles. Through Coaxial, she records Experimental Half-Hour, a collaborative platform engaging worldwide musicians and performance artists via broadcast with her collaborative partner and husband, Brock Fansler.
Food is central to my Mexican heritage and I believe it tells a story of our roots and how we once lived. Besides language, food is an integral way to pass on culture. I ask, what is a utensil? For centuries and even in present time civilizations primarily eat with breads, pita, tortillas or other forms of grains made into a flat a pancake to gather the food. Growing up, there was always a big stack of tortillas in the middle of the dinning table during meals. We would rarely see utensils on the table (only on the occasion of eating soup). This is the cultural norm for a lot of families yet still can be seen as strange in typical western-centric dining etiquette.The unspoken questions about class and being civilized come into play. In Comida a Mano I explore these views by interviewing my dad and cousin who owns and operates a tortilleria in La Paz, Baja California Sur.

ARSHIA FATIMA HAQ – Co curator
Arshia Fatima Haq (born in Hyderabad, India, based in Los Angeles, CA) works across film, visual art, performance and sound and is currently exploring themes of embodiment and mysticism, particularly within the Islamic Sufi context. Her body of work stems from the complexities of inhabiting multiple personas – woman, Muslim, immigrant, citizen – and is conceptualized in feminist modes outside of the Western feminist model. Narrative threads include migration, celebration, warfare, nostalgia, homeland, and borders, often within realms of Islamic influence, through both traditional forms and kaleidoscopic reinventions via pop culture. She is the founder of Discostan, a collaborative decolonial project working with cultural production from the SWANA (South and West Asia and North Africa) region. Haq’s work has been featured at Museum of Contemporary Art Tucson, the Station Museum of Contemporary Art, Broad Museum, Toronto International Film Festival, MOMA New York, Hammer Museum, LAXArt, Centre Georges Pompidou, and the Pacific Film Archive. Currently, she hosts and produces monthly radio shows on Dublab and NTS, and recently released an album of field recordings from Pakistan on the Sublime Frequencies label. She received her MFA in Film and Video from California Institute of the Arts in 2005, and is a recipient of the California Community Foundation Visual Artist Fellowship and the Rema Hort Mann Emerging Artist Grant.

JOELLE ESTELLE MENDOZA – Ceramic Artist
Ceramic artist Joelle Estelle Mendoza will be comissied to construct the top plate of the comal using a clay body that can withstand direct fire heat. JEM is a writer and creator based in East Los Angeles. As an educator in the South Bay, JEM focuses on rhetoric and critical pedagogy. Working with ceramics, JEM explores portals and play through a rhetoric of totem and vessels. JEM’s interdisciplinary work is focused on re-imagining prehistorical and post-future systems and spatial relations.

ANNA LUISA PETRISKO – Video Artist
Anna Luisa Petrisko is a multidisciplinary artist working in music, video and performance. Whether it is experimental opera, multimedia installation, or a tropical new age pop album, her work explores future and ancient ideas, invested as much in the sacred as in technological speculation. In 2018, she wrote and produced a full length album Green, which was released on Practical Records, a Los Angeles-based label for emerging queer artists. She recently received the MAP Fund Award for her forthcoming opera & installation which will premiere at LACE Gallery in November 2019.

CIRIZA – Video Artist
Ciriza is, both, a multidisciplinary artist and birth doula. Her work is focused in the realms of dreams, surreal symbolism, deconstructing mythology and ancestry, animism, elemental forces, and alchemical practices of nature reverence. Her works are explorations of various states of fluidity, transmutation, and the slippery, elusive, anomalistic spaces materializing in tactile, visceral form. Ultimately, the result is otherworldliness, and a connection to the infinite, existing outside of time… though very rooted in earth. It is a space where phantasmagoria becomes tangible, familiar, and feral. Her performances are a distillation of raw energy in ritualistic catharsis: A theater of the primordial. The body as exploration of the fragile threshold between “being” and “not being”. Her hope is to offer a kind of abstract medicine through sensual form. Her instruments are performance, film/ video, sculpture/ installation, sound, and drawing. Ciriza has shown work in Los Angeles, San Francisco, New York, Oaxaca, and traveling exhibitions throughout the U.S
This piece begins from thoughts on my grandmother Aida’s hands, both aesthetically mesmerizing and conceptually fitting when I think of “eating with hands”, as they have labored for decades to nourish life… with beautiful painted talons. The piece is a bit of a ritual feast, so to speak, in dedication to her beauty and hard work, and departs into a visual celebration of sculptural sensuality, texture, and erotic beauty of food.

MARIA MAEA – Video Artist
Maria Maea works with sculpture, performance and sound. Her artist practice taps into a sense of magic, ritual, and play. As a performer and sculptor she has presented in PST x Commonwealth and Council’s Pasado Manana, Coaxial Gallery and in collaborative works for RedCat, the Hammer, Ballroom Marfa, and the Whitney. Community is very important to her practice. From 2013-2106 Maria founded MATA gallery, an experimental sound performance space for underground artists to showcase. Through the years she’s curated at Human Resources and Residency Art. As a freelance artist she’s worked on a variety of projects in the production industry ranging from costume maker for the SyFy network to prop fabrication for music videos and commercial work. Her process has been unique and lends itself to an open, imaginative future.

OMOLARA ABODE – Video Artist
Born in Lagos, raised in California; Omolara Abode, often called Omo for short, spent most of her formative years exploring digital media as a platform for alternative storytelling. After a childhood of experimentation with late 90s consumer equipment, she finessed her technical skills at UCLA’s School of Film and Television, graduating in 2009 with a Bachelor of Arts in production and directing.
As can be expected for all film school graduates, Omo worked a series of low to mid level jobs in all aspects of film production, from lighting to sound mixing, from editing to distribution. Recently, her creative endeavors led her to the world of immersive media – video projections, mapping, and installations featuring what she calls “video collage” – foregoing the traditional narrative methods of post-production and opting for visually arresting timelines.
Through the ever-expanding world of digital arts, Omo anticipates a shift in how film and video are used for creative expression. She intends to explore and ride this new wave through common yet evolving venues; including mid-to-high capacity theaters, art galleries, warehouse raves, nightclubs, and alternative-minded corporate events. Any space can be redefined and elevated with video projections, and Omo has found that immersive media is the key to using an environment for the purpose of making statements through intensely curated content. Her existing work and upcoming bookings can be followed via Instagram.com/videomo.mov”#naijaeats” is an editorial art film featuring traditional Nigerian food. The viewer is treated to a close-up view of the process of African cooking, learning recipes of various Nigerian dishes, in addition to their origins. Fufu with egusi soup is a filling dinner eaten exclusively with one’s hands, with slightly different variations on the recipe depending on one’s location in West Africa. Served with a bowl of water in order to clean one’s hands, this communal food is a heartwarming experience.

SINDHU THIRUMALAISAMY – Video Artist
Sindhu Thirumalaisamy (b. 1990, India) experiments with context-specific practices of looking, listening and speaking in order to create “sonic possible worlds” in form of films, sound compositions, writings and events. Sindhu’s work work is place-based, multi-lingual and collaborative. Her recent projects take place in the context of urban commons and intervene into collective understandings of health, cleanliness and toxicity. Sindhu holds an MFA in Visual Arts from the University of California, San Diego. She has participated in exhibitions and programs at the Museum of Contemporary Art San Diego, San Diego Museum of Art, Artists’ Television Access in San Francisco, Los Angeles Asian Pacific Film Festival, University of Manitoba, University of Oslo, Edinburgh Festival of Art, Kunsthaus Langenthal, Khoj International Artists’ Association in New Delhi and Dharamshala International Film Festival. She is a 2018 Flaherty Film Seminar fellow. “I am interested in producing a piece that uses sound to evoke the haptic sensations that come with eating with one’s hands. Along with these sounds, I want to introduce a layer of narrative or conversation with people who are around me. I am interested in unpacking the ways in which eating habits become classed and gendered, especially among immigrants of colour.”
This video piece is an unmannered piece in which the sonic meets the haptic, and people talk as they chew.

ZEINA BALTAGI – Video Artist
Zeina Baltagi is an artist and educator. Baltagi was born in Stockton and raised between California and Lebanon. Her work explores and exposes the tensions with in identity and social
politics. The work reveals intimate transformations in relation to lived experiences with physical, emotional, economic and cultural mobility. Baltagi holds a B.A. from California State University, Northridge and is a M.F.A. candidate at University of California, Davis. Baltagi has exhibited her work in collaboration with; Museo de la Cuidad de Mèxico, LADOT, Union Station, Los Angeles Road Concerts, PØST, Los Angeles Contemporary Exhibitions, Torrance Art Museum, bG gallery and Klowden Mann.
This short film uses familial ways of eating. The kitchen table is not just where we eat, but where we gather, connect, love, appreciate, share and debate. Food has an active role in the formation of our identities, that is ever evolving with each generation. What we eat and the way we eat is an exemplifier of colonization. Who gets access to a functional kitchen and fresh produce? Who gets the time to cook a home cooked meal? This film guides the audience in a variety of dinner table scenes from Mexico City and San Miguel Allende, Guanajuato, Mexico to a variety of neighborhoods from Los Angeles County and Ventura County, California, U.S.

https://www.currentla.org
This event is FREE

Your ticket for the: Eva Aguila – Comida a Mano: Opening & Video Screening