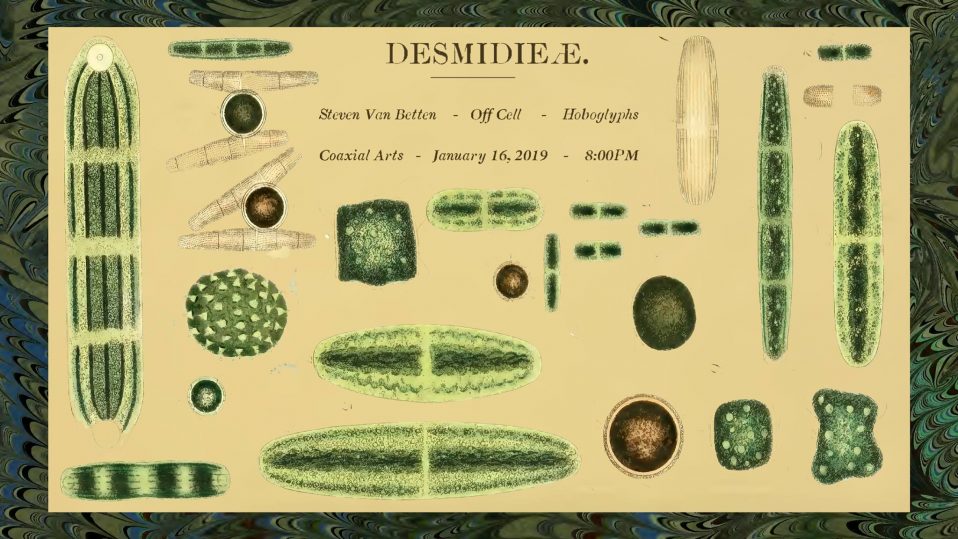 An evening of freshwater, figured, mucous and microscopic performances by Steven Van Betten, Off Cell, and Hoboglyphs.

Steven van Betten (Fell Runner/Kidi Band) sings songs with his guitar. Topics include, but are not limited to: watching bugs get electrocuted by the porch light, sighting neon green shooting stars from the forest in the summer, his grandpa’s experience growing up in Holland during WWII, working at a gypsum mine in the desert of rural Nevada, taking on unpaid internships in Culver City with the hope of making big bucks to pay off student debt, contemplations on marriage, sadness, friendship, love, and god.

Off Cell is grounded in jazz but not afraid to explore new sonic territory. Their sets blend inventive melodies with captivating textures, always shifting and keeping listeners on their toes. Their music is full of a modern, youthful energy that remains conscious of the many traditions of improvised music. All members of the quartet contribute original material to the group’s repertoire for a stylistically diverse yet sonically unified set of music. Off Cell is primarily Los Angeles based and their eponymous debut album was released in February of 2017.

hoboglyphs is a instrumental quartet born in 2012 consisting of henry barajas, jeeshaun wang, jason rodriguez & patrick shiroishi. they recently completed recording their full length and aim to release it later this year.

Your ticket for the: Desmideæ: Steven Van Betten, Off Cell, Hoboglyphs