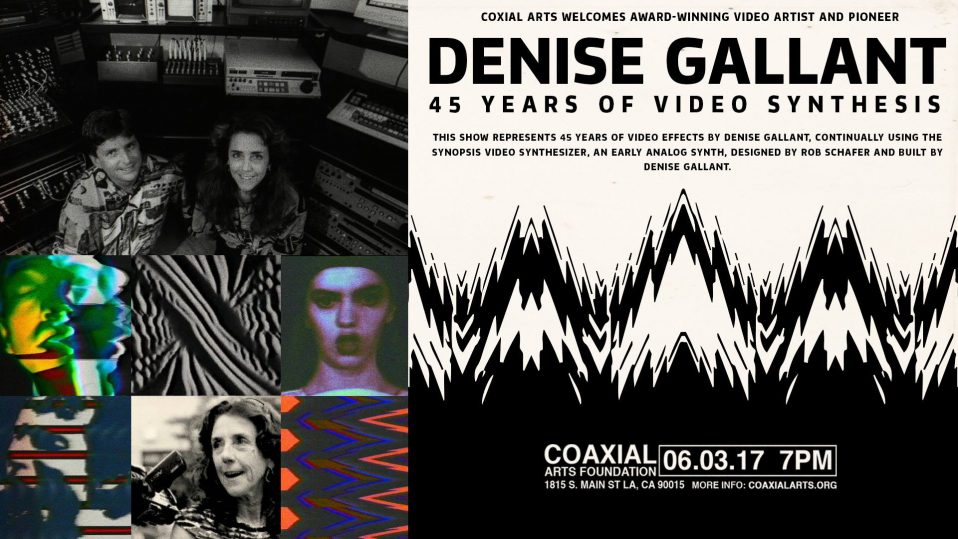 Moderated by Sharsten Plenge from We House Art Houses http://woahis.us/

Denise Gallant is an analog video artists and an engineer that created an analogue video synthesizer in the late 70’s.

Starting in 1976, and carrying through to early 1981, Denise Gallant worked in tandem with CBS engineer Rob Schafer, designed and built a unique prototype video synthesizer. In 1980-83 they founded a small LA-based production company called Synopsis. They worked on many early rock videos and orchestrated frequent live video performances with the synth. They also worked on 10 films, the most notable being Brainstorm, directed by Douglas Trumball.

Denise spent also spent 25 years in the LA based video and production field, and worked at a company called Image West which owned a Scanimate. She produced visual imagery for the early new age video “Watercolors”.

Achievements:
• Received the 1986 Billboard Award for Independent Video and an American Institute Grant for a movie pilot using the effects of the vsynth.
• Produced a very early CDROM with her effects called NightClub Earth
• She made two smaller synthesizers. They were proprietary designs, except for the built in Pitch Follower (Gentle Electric ala 1978), and an adapted design of a Surge sequencer (San Francisco late 1970s) for a simple sequencer.

Your ticket for the: Denise Gallant: 45 Years of Video Synthesis