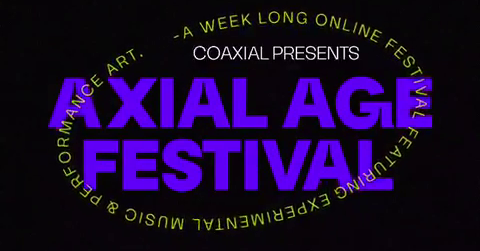 Coaxial Arts Foundation presents AXIAL AGE FESTIVAL livestreamed and co-presented with curators The Wulf, Island of Misfit Toys, nettnett /+/ OTONO, Queerspace, Raah Lein, and the Coaxial board. Our new Axial Age is a contemporary liminal period, when old certainties had lost their validity and new ones are still not ready. The festival runs from Monday 10/12 through Saturday 10/17.
The original Axial Age is the period when, roughly at the same time around most of the Eurasian societies in 8th to the 3rd century BCE, the great intellectual, philosophical, and religious systems that came to shape subsequent human society and culture emerged: Chinese philosophy of Confucius and Lao-Tse, Buddha and Upanishad in India, Zarathustra in Persia, Elijah and Isaiah in Palestine, Homer and Plato in Greece. The Axial Age was a shift—or a turn, as if on an axis—away from more predominantly localized concerns and toward transcendence.

Artists and schedule for each day will be announced shortly

Your ticket for the: AXIAL AGE FESTIVAL – the wulf