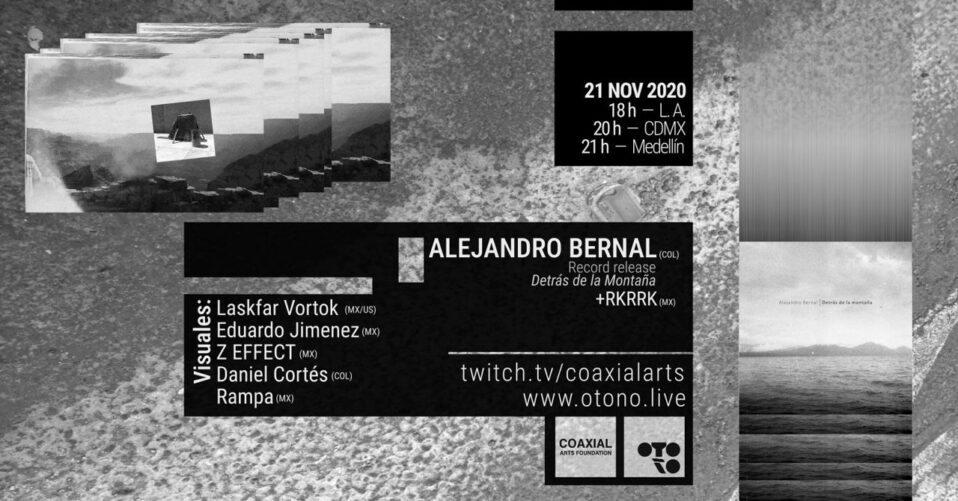 Nos complace invitarlos a una presentación especial en colaboración con OTONO de CDMX
______________________________________
Alejandro Bernal is a composer, sound designer and Latinx multi instrumentalist that has drifted through styles and oscillated between textures. He is also the founder of several important projects in his native Colombia. In recent times, he has toured the world with his music and developed a dialogue between the accessible, the dance floor, experimental, and extensions both between and beyond them.

His solo debut, ‘Detrás de la montaña’, reflects his more abstract side, encompassing both the ethereal and concrete through subtle detail.

This is the premiere of Alejandro Bernal’s international debut for OTONO, composed in his home of Medellín and now formally on this date with very special visual interventions for each track of the album and other live surprises.

Opening Act: RKRRK (MX)
Audiovisual artist Diego Madero works on new projects as RKRRK, his moniker focused on experimental electronica with hacked and hybrid elements; he will present a mixture of different analogue and digital processes, a retrospective of his different eras as well as a visual narrative, to warmup the night. RKRRK recently released an album through Mexico City label, Antimateria Sonora.

Donativos bienvenidos / we welcome your support and donations.