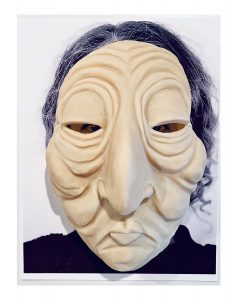 Doikayt (hereness) is a new iteration of Julie Weitz’s My Golem, a multipart performance piece about the feminist and queer embodiment of a mythical creature drawn from Jewish tradition. Through film and improvisational choreography, Doikayt follows a diasporic golem’s return to her ancestral homelands in Eastern Europe, and portrays her search for embodied connection to where her mythos flourished and was then nearly extinguished by genocide.

This summer, Weitz will stage a series of site-specific performances at locations of Jewish ancestral trauma and spiritual revelation in Poland, Lithuania, Czech Republic, and Romania. Weitz will then use the footage of these documented performances to create a short film. During her residency at Coaxial, Weitz is preparing for her journey to Europe, and documenting the development of the three characters she’ll be enacting in situ for Doikayt – a dybbuck, golem, and tzadik.

Doikayt, or hereness in Yiddish, was historically an organizing principle of the Bund – the early 20th century Jewish socialist labor movement, which was based in Eastern Europe and Russia. Politically and culturally, supporters of doikayt advocated for a vibrant secular Yiddish culture, decentralized in the Diaspora and opposed to the settlement of Palestine. While doikayt lost its relevancy after the Holocaust, it has been revived by radical Jews organizing for anti-racist and anti-facist justice.

For Weitz, doikayt foregrounds the power of places and moments to resonate somatically within our minds, bodies, and spirits. Within the larger framework of My Golem, Weitz has developed a performance art practice that responds to local surroundings with contextual understanding and attuned sensory awareness of historical precedent. By moving her project from the U.S. to Eastern Europe, Weitz is instrumentalizing the golem myth to embody bold, new, reparative ways of relating to historical trauma, as well as contemporary inequity.

Julie Weitz is a transdisciplinary visual artist whose narrative-based cinematic works include live and multimedia performances, photography, drawing, and installation. Her highly collaborative process often involves spiritual leaders, activists, poets, choreographers, and musicians. Frequently drawing on her heritage and life experience as a queer, Ashkenazi, and diasporic Jew, Weitz’s spiritually-resonant works engage the most pressing ethical challenges of our time.

Weitz has been featured in Artforum, Art in America, the Los Angeles Times, The New York Times, BOMB, LA Confidential, Photograph Magazine, Hyperallergic, and on KCRW. Her first solo museum exhibition is currently on view at The Contemporary Jewish Museum in San Francisco, California. Weitz is a 2020–21 Cultural Trailblazer of the City of Los Angeles Department of Cultural Affairs and a Wallis Annenberg Helix Fellow at Yiddishkayt. She has received past support from the California Center for Cultural Innovation, The Banff Centre, Asylum Arts, and the Memorial Foundation for Jewish Culture.’